Weapon used to wield the power of the six Infinity Stones

"Fun isn't something one considers when balancing the universe. But this... does put a smile on my face!"
―Thanos[src]

In Thor's vision induced by Wanda, Thor saw the Infinity Stones being assembled on a cloud-like version of the Infinity Gauntlet.

Thanos opened a vault to a stoneless Infinity Gauntlet that he put on his left hand and made note to find the stones so that he can destroy Earth himself.

The gauntlet was forged by Eitri, the king of the Dwarves, using the forge that had been used to create Mjölnir. Thanos ordered Eitri to forge the gauntlet in exchange for sparing the dwarves' lives but went back on his word and only spared Etri when the deed was done. Thanos went on to collect all six Infinity Stones and erased half the life in the universe with the snap of his fingers.

After the Decimation, Thanos used the stones to destroy them, in turn causing major damage to him and fusing the gauntlet to his hand. After collecting the Infinity Stones from the past, Tony Stark constructed his own Infinity Gauntlet to wield the stones.

Masterfully forged from Uru, the most powerful metal in the universe, the Infinity Gauntlet holds phenomenal levels of durability, as it is capable of withstanding having all six Infinity Stones embedded inside it with no damage. It also took no damage from a shot from Star-Lord's Quad Blasters. However, it's durability can be compromised should the wielder be injured, which is how the Gauntlet was scorched after wiping out half the universe, as Thanos had already been severely injured by Thor but it remained functionable, as Thanos was able to warp away with the Space Stone. Though using the Stones all at once again in order to destroy the Stones would further damage the Gauntlet, fusing it into Thanos's left arm, it remained capable of taking a photon blast from Captain Marvel.

The specific purpose it was made for, the Infinity Gauntlet allows the wielder to channel the powers of all six Infinity Stones; it even allows the use of their powers in unison, such as using the Space Stone to send the Power Stone's energies to a nearby moon. The stones seem to be drawn towards the Gauntlet, moving to their designated slots. Upon completion of the Gauntlet, the user is able to accomplish almost anything at whim - even wiping out half the universe with a snap of the fingers. In spite of all this, the Gauntlet has a flaw in that it has to be clenched before the power of any Stone could be accessed. In addition, it has been shown using all six Stones simultaneously are able to overcome the Gauntlet's protection and kill most beings and even the most physically powerful of beings are still vulnerable to the usage of all six Stones at once, as even Thanos suffered considerable damage to his body, notably his left arm all the way up to the left side of his neck, and after he used the Stones one last time to destroy them, he was nearly killed and suffered more grievous injuries. 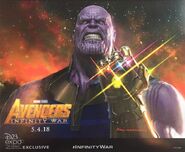