​The original armor, Tony Stark created the Iron Man Armor Mark I while in captivity in Afghanistan. As such, it is crudely designed and bulky. It does have the necessary capacity, however, to help him escape his captors. It is bullet-proof, has two built-in flamethrowers, a rocket launcher, as well as rocket boosters for jumps. It is notable that this version of the armor, unlike the later Mark 2 and Mark 3 armors, does not have an on-board AI system or internal diagnostic display. The helmet served only as a simple shield, and was not fully sealed. Stark refashioned the special iron-copper-magnesium alloy from disassembled Stark mortar cannons into the Mark I armor, rendering it especially bulletproof. To power the thruster boots, Stark reportedly siphoned the propellant fuel from four Stark S-class ballistic missiles into two Stark M-class mortars, creating two homemade fuel tanks, welded shut except for valves connecting fuel hoses that led down to the Mark I's legs. 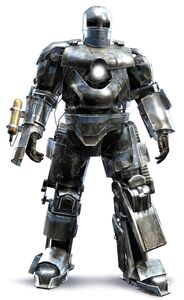 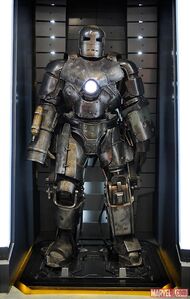 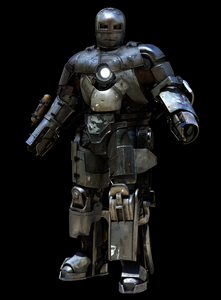 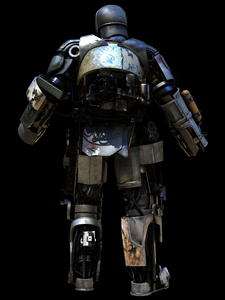 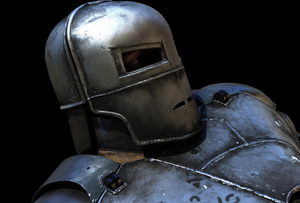 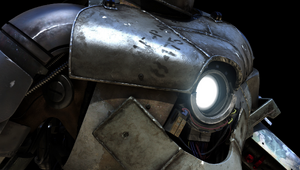 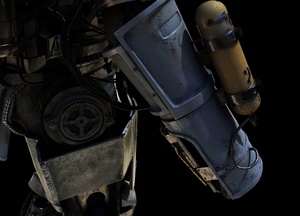 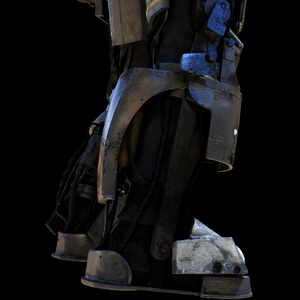 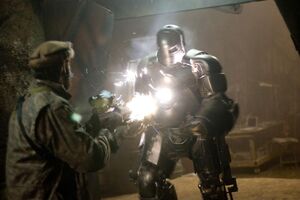 The Mark I was the first Iron Man armor. Stark had only a few days to build it with few resources. In addition, he didn't have the assistance of J.A.R.V.I.S. his A.I. And so the final product came out crude and bulky. It had very limited articulation. It magnified his strength greatly. It could only protect Stark from small arms of fire and extreme g-forces. It also featured a rocket which he used to seemingly kill Raza. It sports twin flame throwers, one on each arm. He used it to kill many ten rings soldiers and burned their stockpile of his weapons. Lastly it features thrusters on each boot for short jumps.

The suit was Stark's "ticket" out of the cave in which he and Yinsen were held captive. He had to quickly build the suit to evade detection and make the deadline for which Raza expected the Jericho Missiles to be completed. Tony managed to complete the suit and make it out alive, but he failed to save Yinsen. He killed many of the terrorists and burned their weapons. He then activated the thrusters and quickly left the area. Shortly after, the thrusters failed and Stark plummeted in to the sand. The suit was disassembled and Stark was forced to abandon it but he was eventually found and rescued by James Rhodes.

Later, many Ten Rings terrorists dug up the remains of the Mark I.

Obadiah Stane confiscated the armor and used the design to build his Iron Monger armor. The reconstructed armor was found by Pepper Potts, Phil Coulson and several S.H.I.E.L.D. agents in Stane's Iron Monger facility. Upon seeing it, Pepper commented that she thought Stane's armor would've been bigger before Stane attacked using the Iron Monger armor.

Tony displayed a reconstruction of the Mark I in his workshop.

The reconstructed Mark I was destroyed along with Mark II to VII from the attack of the Mandarin's helicopters.