​The Mark IV armor was created by Tony Stark after his Mark III was damaged in his battle with the Iron Monger. It is very similar to the Mark III. 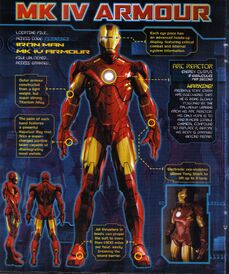 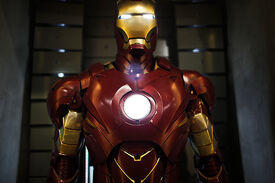 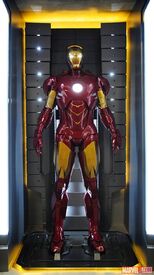 Similar to the Mark III's, this chin-mounted device seemed to allow Mr. Stark to use local cell sites for wireless communications. It also included a loudspeaker as well as several individually-calibrated directional microphones, which Stark used to pick up exterior sounds.

Stark previously weaponized his RT chest piece in the Mark III by externalizing its light energy into a powerful beam. The thermoplastic lens used to focus the beam's energy was modified for the Mark IV with a variable prismatic shutter that allows Stark to control the beam's intensity.