​ The Mark IX armor was the second armor that Tony Stark created after the Chitauri invasion of New York. It is almost identical to the Mark VIII armor. 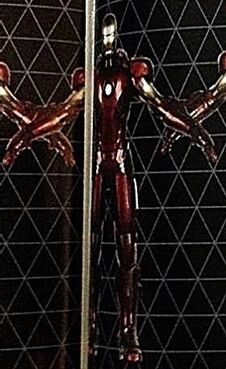 This is the ninth suit built by Tony Stark, the second after the battle of New York. It has redesigned colored plates and a rough-edged mask. It was designed for extreme flexibility, movement and agility.

The second armor added to the Iron Legion. Tony Stark used this suit when he was discussing with Rhodes the Mandarin's recent activities. When the "House Party Protocol" was ordered, it and the other Armors flew to Florida and attacked the Extremis soldiers. Later in the battle, the suit flew in and attacked Pepper, who had become infected with Extremis. Tony tried to call it off but his communicator was knocked out of his ear. So Pepper jumped and punched through the suit's chest and ripped off it's arm and a combination of the suit's repulsor and a dropped missile to kill Killian once and for all.