​ ​ ​ The Iron Man armor, also known as the Mark L armor, is the fiftieth Iron Man suit. The Mark L armor was designed and created by Tony Stark to make a more powerful suit than the Mark XLVII armor.

The suit is similar to the Mark XLV and the Mark XLVI but is more powerful than either of the two. The suit, similar to the Mark XLVI, forms out of "nowhere" around Tony's body. The armor has extra equipment than the other suits, as now it also includes pop-out wings and a laser canon that forms from one of the suit's arms. However, perhaps the suit's strength might not match Thanos as he requires a single punch to knock Iron Man out. The other arm includes a completely different canon that is rather mounted on top of the arm. Unlike the Mark XLVI, rather than forming itself from specific parts, the Mark L forms in dozens of tiny particles, which suggested it to be more comparable to the Model-Prime Armor from the comics rather than the Bleeding Edge, which resembles the suit physically. 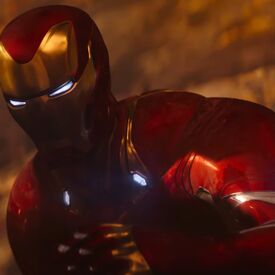 Three weeks after the battle, Tony used the armor's helmet to record messages to Pepper Potts while stranded aboard the Benatar. After being rescued by Carol Danvers, Tony refused to help go after Thanos again and tossed Steve Rogers the Arc Reactor containing the armor, telling Steve to use it when he goes after Thanos instead. 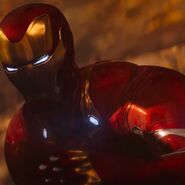 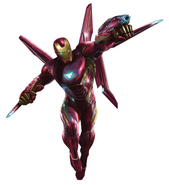 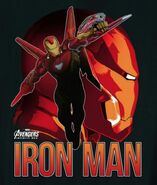 Promotional
Community content is available under CC-BY-SA unless otherwise noted.