​The Mark VI armor was created by Tony Stark to replace the Mark IV armor when it was discovered that the Arc Reactor could be powered by vibranium, which did not wear out or poison the user. It is similar to the Mark IV in appearance except for the triangular chest piece. Stark developed the new core via building a particle accelerator, then superheating the primary triangular core to a white arc, creating a source acceptable for the Arc reactor. 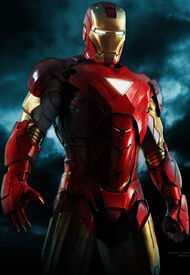 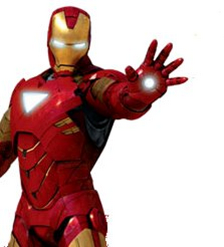 The first appearance of the Mark VI

Preparing to use the high-intensity laser

The aftermath of the high-intensity laser 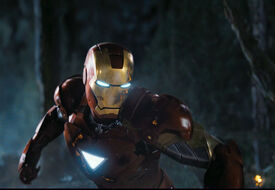 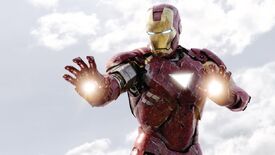 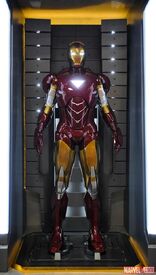 The primary upgrade to the Mark VI is the inclusion of a prototype 200 PW laser system. The laser takes advantage of the increased power supply provided by the new RT chest piece and is configured for a one-time simultaneous shell discharge from each of the two gauntlets. The weapons may be chemical, as suggested by the nature of the ejected shells from the gauntlet. Another theory is that a micro-particle generator in the suit powered by the upgraded element could serve as a chem-particle core to generate energy enough to create an extreme exothermic reaction.

Stark upgraded the wrist-mounted mini-missiles to newer casings that allow the missiles to penetrate through armored surfaces before detonating. While modifying the suit's gauntlets for the new casings, he also increased the capacity to a circle of 8 missiles.They were shown to have great effect, as only three small missiles could critically destroy a Hammer Drone. The Mark VI is equipped with twin rectangular six barreled shoulder-mounted missile launchers. The missiles seem to be computer-guided and micro-jet powered. These have no differences from earlier armors. They proved ineffective against Vanko's Mark II armor when fired upon. An upgraded version of these were seen in The Avengers on the Mark VII, modified as hip-mounted universal direction missile launchers with a circle of 16 missiles.