​The Mark VII armor is an upgraded version of Tony Stark's Iron Man armor that he utilizes at some point during his time with the Avengers. It uses a laser-scannable pattern reading system, and functions as a non-gantry armor capable of near instant application.

It has over four additional thruster systems, and is equipped with over 92 high-explosive micromissiles, twin tri-barreled laser modules, and a single high-explosive anti-armor missile, as well as upgraded plasma chargers, allowing for higher repulsor rates. 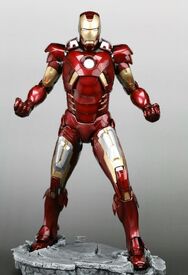 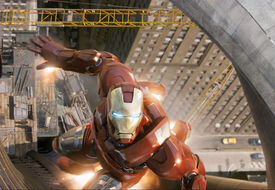 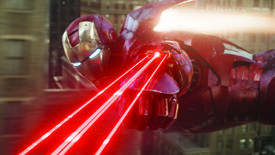 Stark in the Mark VII, using a tri-barreled laser to wound a Leviathan. 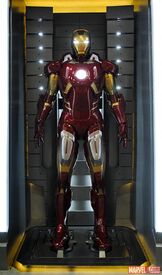 This suit uses advanced technologies based on the Mark V Suitcase armor, which makes it far easier to put on. When not in use, the Mark VII can be folded into a large pod. When activated by J.A.R.V.I.S., it can take flight with its repulsor units and fold-out wings. After making its way to Tony, it extends robotic arms equipped with laser scanners, which synchronize with scannable wrist cuffs. The armor will automatically wrap itself around him, without any need for a gantry. This capability was used in The Avengers, when the Mark VII saved Tony after Loki threw him from the top of Stark Tower. The technology used for the assembly of the armor around Tony is likely a precursor to the technology that will be used for the Mark XLII. The chestpeice is circular, like Marks I-V, and the Mark VII was equipped with two additional thrusters on the large "backpack" module, as well on the calves, legs, feet, and chest.

The Mark VII is equipped with twin tri-barreled laser weapons on the wrist gauntlets capable of considerable damage, as seen when a few seconds of firing destroyed the armor of a Leviathan, exposing its skin. Four arc shaped shoulder-mounted missile launchers, two on each shoulder, carried over 23 air-to-air high explosive missiles, each seemingly superheated to the tip. The left wrist gauntlet housed an anti-armor rocket.