​ The Mark X armor was the armor created after Chitauri invasion of New York. It is the first in a series of advanced Iron Man armors. 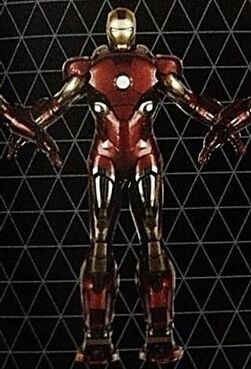 The suit is another basic Iron Man suit, presumably upgraded to have more flight, speed, and power. It has been equipped with extra visible repulsors on it's sides near the abdomen area, meant to increase speed and power. Also, on the soles of its feet, it has oversized and improved Flight Stabilizers, increasing it's power, letting it reach high-altitudes and go faster. It was the fastest suit until other suits such as Tiger and Shotgun. Other differences include an enhanced chest piece, redesigned colored plates, and a new face plate design.

It was created after the New York battle and added to the Iron Legion. When the "House Party Protocol" was ordered, it came with the rest of the Armors to assist Tony in the Extremis battle. It was destroyed either by the Extremis soldiers or the Clean Slate Protocol.