​ The Mark XLI Skeleton armor (nicknamed Bones) is one of the new Iron Man armors created by Tony Stark after the New York Battle and is part of the Iron Legion. It is the prototype to the Mark XLII. It is a lighter version of the Iron Man suit. Focused on speed and maneuverability. 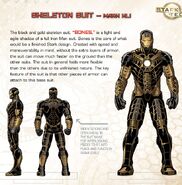 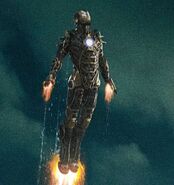 Created with speed and maneuverability in mind, without layers of additional armor, the suit can move much faster on the ground. The suit in general feels more flexible than others due to its unfinishd nature. The key feature is that other pieces of armor can attach to the "base" suit; several indentations and open areas in the suit make for interlocking pieces to fit in place and function seamlessly.

After the battle of New York, this suit was created and added to the Iron Legion. Once the "House Party Protocol" was ordered, it and the Iron Legion went and fought the Extremis soldiers in Florida. It was one of the first Armors to attack, as it split apart and attacked soldiers, pushing them down to their deaths. Tony called for a suit and it came, but a Extremis soldier knocked it away. It was destroyed by a Extremis Soldier.