​The Mark XLII Autonomous Prehensile Propulsion armor was a suit designed by Tony Stark, after the battle of New York. Tony designed the Mark XLII so he could use a brain-computer interface (BCI) to mentally summon it piece by piece anywhere and at any time he wanted or needed. Tony is able to remotely summon the Mark XLII to Pepper for her to wear after his home is attacked by the Mandarin's forces. 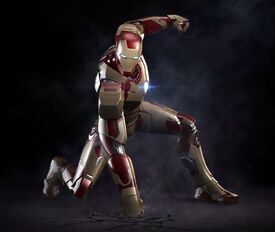 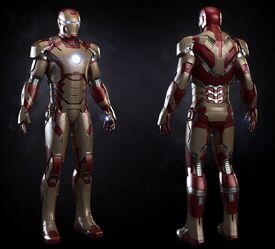 The main feature of the Mark XLII is that it uses a brain-computer interface that gives the armor the ability to be mentally summoned and assembled to anybody. Stark injected himself with calibrated sensoring chips, so only he could summon the armor. Each armor piece had repulsors so they could travel far distances by themselves. And as always, the armor has repulsors on its hands and feet. It also has repulsors on its chest for addition lift capabilities.

Tony tested the Mark XLII in his workshop. His first attempt was more or less successful. However, one of the armor pieces failed to assemble onto Stark and crashed into the Mark IV armor. Also when the pieces flew to him, it seemed to be quite hard and painful as Stark was pushed back from the impact and the piece for the groin area hit him rather painfully.

Later, Stark showed that he could control the armor remotely with a headset. It could also transmit his voice. When Stark was asleep, he had a nightmare and accidentally summoned the armor.

When Stark's house is attacked, he summoned the armor onto Pepper Potts to protect her. After Potts got to safety, Stark donned the armor and managed to take down two helicopters despite the fact that the flight and weapons systems were not ready to operate. Stark fell into the sea and was trapped by the debris. Water started to fill the suit but Stark managed to free himself, and the flight system became operational. Stark escaped and fell unconscious mid flight. He woke up in Tennessee and found that his suit had run out of power, so he was forced to take it off and drag it. He broke into a garage and attempted to repair it.

When Stark was captured by A.I.M., he managed to summon the armor to his location from Harley's garage. He escaped and reunited with James Rhodes. They then searched for the Mandarin on a speedboat. Stark remotely operated the armor to stop Eric Savin on board the Air Force One. The armor saved 13 passengers and crew members from falling but failed to save President Ellis. Soon after his moment of triumph, the Mark XLII is disassembled after being hit by a truck.

Later, when the "House Party Protocol" was ordered, the Mark XLII flew to Tony when he confronted Killian. But just as the armor was within reach, it hit a barrier and disassembled. Just as Killian was about to kill Stark, Stark mentally assembled the armor around Killian and remotely detonated it.