​The Hulkbuster is an iconic piece of Iron Man tech a prebuilt super suit designed to take on the Hulk. The Hulkbuster Armor was developed by Tony Stark and Bruce Banner, after they studied the Hulk’s physical actions and strength levels in an effort to find a way to contain him and minimize the damage caused by his rages. A satellite named Veronica in low orbit is always around Banner and at a moment’s notice, Tony Stark can deploy the Hulkbuster armor, get into it and stop the Hulk in his tracks theoretically. 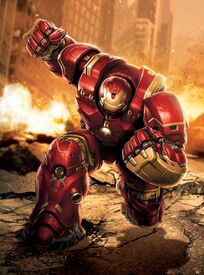 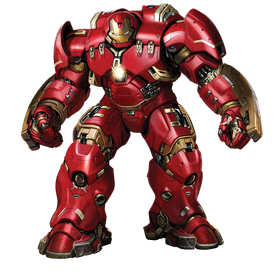 The Hulkbuster was designed to match the incredible strength of Hulk should he ever need to be subdued, being powered by multiple Arc Reactors in order to grant the strength required for such a task. The suit has enough strength to send the Hulk flying two streets away with one punch. Using a new propulsion system, each section can fly to the user from a drop pod hovering around the combat zone and automatically assemble into the Hulkbuster armor. Despite being composed of individual parts, the XLIV is still able to sustain blows from Hulk, unlike the Mark XLIII. It has many different variations of it's limbs; for example, after having the initial left arm removed, a replacement with a rapid-fire hydraulic punch was used to repeatedly bash Hulk's face at an as of yet determined, but still brutal velocity. The Hulkbuster is incredibly strong, seen when both it and Hulk throw punches that brutally collide, creating a gigantic shockwave so powerful it shatters windows and glass structures from miles around. It was also capable of shooting broader and fiercer repulsor blasts from its hands. It was capable of flying like its predecessors, however, because it was extremely heavy and enormously powerful, it could not fly for extended amounts of time without expelling large amounts of energy too quickly.

After Wanda Maximoff manipulated Doctor Banner into turning into the Hulk, Tony had no other choice but to deploy the system as all of the other Avengers with the exception of Clint Barton were defeated. The armor was deployed from orbit and came split into two separate parts that assemble itself onto the Mark XLIII. After unsuccessfully trying to reason with the giant monster, the Hulkbuster engaged the Hulk in an intense and incredibly destructive battle. Hulk damaged the armor, Tony called for extra parts and used it's many capabilities to try and knock the Hulk down or fly him out of the city. After the fight intensified and destroyed several city structures, Tony desperately resorted to dropping him through a building still going through construction, this seemingly calmed the Hulk enough that Stark could knock him out with a final massive punch. 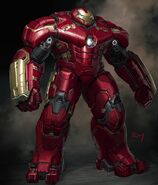 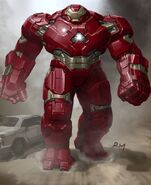 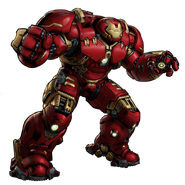 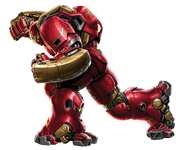 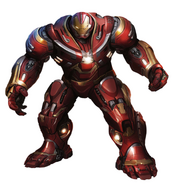