​ ​ ​ ​ ​ ​The Mark XV Stealth suit (nicknamed Sneaky) was created after the New York fight and is the first armor to be created for a specific thing and first to be named. It's name comes from it's cloaking system built into it. Sneaky in the Hall of Armor 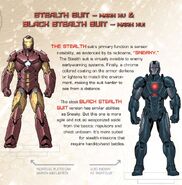 The suit is lighter than most other suits, so that it is easier for stealth missions. Its most noticeable features are it's slim and smooth body armor. The chrome painting allows it to turn lighter or darker. It cannot be seen on enemy early-warning systems due to it's stealth features. Most of the suit's energy is directed towards the cloaking system so that it could function and run smoothly in a mission. Due to lesser weaponry, it is less suited for combat that other Iron Man suits, but Is still combat ready.

The suit was created after the New York battle. Tony realized that there couldn't be one suit that could do anything, so he started building suits specializing in certain areas, starting with Stealth. Sneaky was the first to be built of the series. Afterwards, it was put into the Hall of Armor with the rest of the Iron Legion. When the "House Party Protocol" was made, it and the other Armors flew to Florida to fight the Extremis battle. It was destroyed by the "Clean Slate Protocol"