​ ​The Mark XVII Artillery Level RT suit (nicknamed Heartbreaker) was created after the battle of New York. It's name comes from its oversized chest RT. 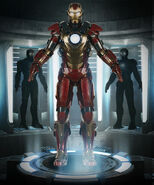 It has a bulkier but fit appearance, because of it's thicker multiple-layered titanium platings, and has an oversized chest repulsor RT built within the suit's armored chest area, which is it's most unique and notable feature, that can shoot powerful blast. The mask was based off of the Mark XI. It shoots a powerful Unibeam that has a wide or narrow range and can fire faster. It can also generate a force field for protection. The suit's helmet and mask designs are similar to the Mark XI, however it's mask has a more rough edged look and not as smooth as other armors.

The suit was created after the New York battle. Tony realized that there couldn't be one suit that could do anything, so he started building suits specializing in certain areas. Heartbreaker was built and put into the Hall of Armor with the Iron Legion. When the "House Party Protocol" was ordered, it lead The suits to Florida and fought in the Extremis battle. When Red Snapper was in trouble, Tony ordered Heartbreaker to help Snapper while the suit was covered in Extremis soldiers, but it arrived too late, as an Extremis soldier ripped off it's face plate, sending it flying into the oil rig. It then came and picked up Rhodey, seeing as all the suits were only coded to Tony. However, a Extremis soldier jumped onto the suit and Heartbreaker was forced to drop Rhody. It was either destroyed by the "Clean Slate Protocol" or the Extremis soldiers, though it was likely destroyed by the soldiers.