​ ​The Mark XXV Heavy Construction Suit (or Thumper/Striker), also known as the brawn of the bunch, was created after the NYC battle. The name Thumper comes from it's powerful jackhammer like hands.

As seen in The Official Game 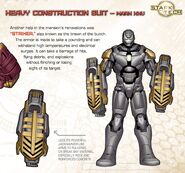 As seen in children's book

It was built for heavy construction and specialializes in it's heavy power. This suit has a green chest instead of the traditional blue, a feature seen only on this suit. It has powerful Jackhammer-like hands that can pulverize any material, like rock and concrete. It can withstand high temperatures and electrical surges. It can take all kinds of hits, explosives, and debris without losing it's target.

The suit was created after the New York battle. Tony realized that there couldn't be one suit that could do anything, so he started building suits specializing in certain areas, like construction. Thumper was placed into the Hall of Armor along with the rest of the Iron Legion. When the "House Party Protocol" was ordered, it and the rest of the Iron Legion flew to assist Tony in the Extremis battle. After Heartbreaker dropped James Rhodes, two Extremis soldiers were running towards him. Thumper then landed in front of him. It hit the ground with its hands, sending them flying into the air. It then punched them and Tank blasted them. It was either destroyed by the "Clean Slate Protocol" or the Extremis soldiers.