​ The Mark XXXIII Enhanced Energy suit (or Silver Centurion) was made after the battle of New York. 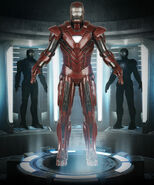 The suit used a directed energy reactor, focusing its power and channeling it through to the suit's appendages and weapon systems, giving it enhanced speed, strength, and firepower. Because of the extra energy output, this armor also has a slight energy shield that passively improves it's durability. It's vibranium-powered arc reactor was extensively modified to accept the strain and tension of the channeling of technology and as such is shaped much like the Mark VI's arc reactor, with a triangular shaped plating.

It was created after the battle of New York and was added to the Iron Legion. When the "House Party Protocol" was ordered, it and the rest of the Iron Legion went to Florida to help Tony. It immediately came to Tony and he put the suit on to find Pepper. Once he did, he tried to help her but Aldrich Killian jumped onto him and began cooking Tony in his suit like "a little turtle trapped inside his little turtle shell." As Killian is about the punch him, he activates a blade and cuts his hand off with it, making him roll over in pain. Tony then leaves the suit as it was so overheated that it could no longer work.