​ The Mark XXXIX Suborbital armor (nicknamed Starboost or Gemini) is one of the many armors created by Tony after the New York Battle. It is specifically made for space travel, possibly inspired after Tony nearly died while in space. 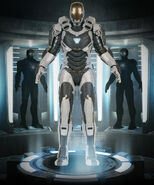 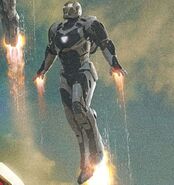 As seen in Promotional poster 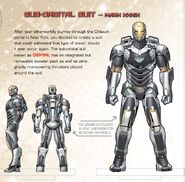 Suit's external repulsors could propel it to escape velocity, just not fast enough to achieve orbit. It has an integrated, removable booster pack and zero-gravity maneuvering thrusters. The coloring of the suit, with gray and white armor and a gold faceplate, may have been designed to look like a space suit used by astronauts.

Gemini was created after the New York Battle and added to the Iron Legion. When the "House Party Protocol" was put into play, it and the rest of the Iron Legion flew to Florida to fight off the Extremis Soldiers. It was destroyed by either the Extremis soldiers or the "Clean Slate Protocol".