​ ​ The Mark XXXV Disaster Rescue suit (or Red Snapper) was created after the New York battle. It gets it's name Red Snapper from the color of the suit and the large extendable claws. It is designed for rescue and can survive in dangerous places. 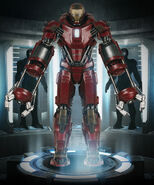 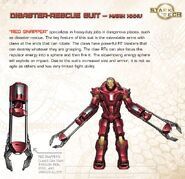 As seen in a children's book

The key feature of this suit is the extendable ending with rotating claws that can tear through iron, steel, and various alloys. Claws are equipped with RTs that focus repulsor energy into spheres and fire them; essentially destroying anything that they can grasp. The slow-moving sphere will explode on impact. Due to the suit's increased size and armor, it is not as agile and has very limited flight capability.

After New York, Tony began working on new armors, and formed the Iron Legion. When the "House Party Protocol" was ordered, it and the rest of the Iron Man armors went to Florida to assist Tony. It became surrounded, so Tony ordered Heartbreaker to assist him, though he only called him Snapper. Heartbreaker was able to kill most of the Extremis soldiers, but one remained and ripped off Red Snapper's mask, causing it to fly straight into the oil rig, making a huge explosion the trapped Pepper in rumble.