Iron Man
The Iron Monger is the most common name used to refer to the armor developed and used by Obadiah Stane to fight the Iron Man armor. Its design is based on Tony Stark's Mark I design.

Pepper Potts, Phil Coulson, and several other agents of S.H.I.E.L.D. arrive at Obadiah's research facility after they discover his secret plans. They spot the Mark 1 Armor and a storage location where something else was kept. Just then, a gigantic robotic suit comes to life and attacks them - it's Obadiah's counterpart suit, code-named the Iron Monger.

As Obadiah is about to kill Pepper, Tony discovers that Pepper is being attacked and rushes to save her. The two ironclad warriors have a huge battle. Iron Man and the Iron Monger's battle soon transfers from Stark Industries to the streets. Iron Monger picks up a car and tries to throw it at Tony, but Tony is able to catch it and safely put it back down (and accidentally get run over as well). Iron Monger then uses a motorcycle instead and successfully makes Iron Man crash into a bus. He then sets the (evacuated) bus alight with one of his shoulder missiles. Tony is sent flying, but activates his updated rocket boosters just before he hits the wreckage. Tony is then chased hundreds of feet into the air by Stane, who also upgraded his own boosters. Stane manages to grab Tony, but is frozen as they go higher into the atmosphere. Tony uses this to scramble out of Stane's grasp and send him hundreds of feet down to the surface. However, by this point Tony has lost most of his power, and he tumbles back down to Earth as well.

Tony lands back at Stark Industries, right next to the skylight of the Arc Reactor. Stane soon follows, and they continue battling. Tony is caught in Stane's grasp once again, but is once again able to escape and rips out Stane's optical circuits. Stane removes his helmet and gloats that he has done what Stark could not: create the ultimate weapon (aka his own suit, according to him). Tony keeps confronting Stane while telling Pepper to charge up the reactor. When Iron Monger has the upper hand and gets close to killing Tony, Pepper finally fires the Arc Reactor, sending a huge blast of energy so high it reaches the clouds, damaging the Iron Monger armor in the process. Stane is knocked unconscious by the blast, and he with his suit tumble into the generator, causing an explosion that kills him and destroys the armor.

According to Obadiah Stane, this armor, when adequately powered, is "superior in every way" to the Iron Man armor. However, it had at least two key weaknesses, as it cannot function at the freezing temperatures of the upper atmosphere and has partially-exposed wiring in the neck area, something Tony Stark exploits to disable its targeting system. The armor's weaponry was exposed (except for the missile launcher in his shoulder), unlike Iron Man's, who's armor retracts or separates to reveal the weapons.

The Iron Monger armor gave Obadiah superhuman strength enabling him to lift at least 50 tons. The armor also was equipped with a 23mm gatling gun, Stark S-category missiles, a laser-guided warhead, omnium exterior, a stun device, a grenade launcher, and flight equipment. The Iron Monger's onboard computer had little navigational focus, as the suit was based on Tony Stark's Mark I armor he "acquired" from the Ten Rings. Obadiah made smart targeting the HUD's primary component. Omnium, a steel alloy of invincible strength, was developed in Stark Industries' Sector 16, specifically for use in the Iron Monger suit.

Though the Iron Monger suit seems invincible, Obadiah hadn't solved the ice problem. The wires connecting to his optics also appears to be exposed and weak, as Iron Man was able to see them and pull them out with ease, causing Obadiah's armor to go blind, forcing him to open his helmet. 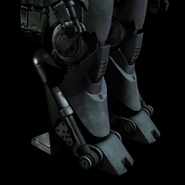