"You look like Freddy Krueger face-fucked a topographical map of Utah."
―Weasel to Deadpool[src]

Jack Hammer, also known as Weasel, is a friend to Wade Wilson. He is a bartender from New York City.

At some point in time, Weasel met and befriended Wade Wilson, a mercenary. Running a bar for mercenaries known as Sister Margaret's School for Wayward Children, Weasel had bets in which the mercenaries would place bets on who would die. This was called the "Deadpool". Weasel was present when Wade met and fell in love with Vanessa Carlisle. When Wade was diagnosed with cancer; Weasel tried to cheer him up by joking about his inpending death. When Wade ended up gaining powers, but at the cost of his face being horribly scarred, Weasel gave Wade an idea to wear a mask and use the fact that the people who did this to him thought he was dead, to his advantage giving Wade the idea to use the name Deadpool for his new persona. Later, Ajax and Angel Dust came to the bar to try and find Wade's location when they attempted to attack Weasel, the mercenaries quickly drew their guns to come to his defense, however, the two saw a picture of Wade and Vanessa that Weasel had kept and decided to go after her instead. When Wade learned of this, he and Weasel decided to arm up, but Weasel did not want to go out of himself, he admitted cowardice which Wade understood.

Weasel is by nature cowardly, unhelpful and lazy and at times even downright mean such as insulting of Wade’s disfigured face after the experiments performed on him at the Workshop. However, despite these many flaws he is for the most part still a good friend for Wade, who constantly confides in him and even can show a few acts of bravery such as his unwillingness to be intimidated by Ajax and Angel Dust. However, when sufficiently threatened, Weasel will sell his friends out of it means he will be unharmed and will ask his friends if he feels the danger is sufficient enough. 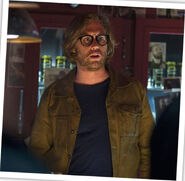