Bruno Ricci
Jacques Dernier was a member of an elite special unit of allied soldiers formed in World War II known as the Howling Commandos.

Jacques Dernier was a French soldier who was captured by HYDRA. When Captain America single-handedly assaulted the facility in which he was prisoner, Dernier along with his companions broke free and wreaked havoc on the HYDRA agents, coming back to US military base immediately after.

Shortly after their break-out, Dernier and his comrades were invited to join a special elite squadron led by Rogers himself. Dernier, after a brief conversation in French with Gabriel Jones, happily accepted. Along with the other Howlers, Dernier takes part to every assault against HYDRA, until, during the one at Johann Schmidt's fortress, Cap goes missing in action.

His fate after the events of the WWII is unknown.

In April 1944, Steve Rogers, Dernier and the rest of Howling Commandos located Schmidt in a castle on an island in the Nazi occupied Danish Straits. There, Schmidt studied a mystical Viking runestone. Schmidt attempted to destroy them but they survived.

On a mission to a HYDRA base in 1944, the Howling Commandos and Captain America stowed away on a small merchant boat, when according to his plan it is attacked by a HYDRA sub, the Leviathan, as it is a perfect test target. While they are distracted, the Captain swims to the sub and proceeds to enter and attack the crew, winning it for himself and the Commandos, who anxiously wait in a raft. After finding out where the base is via map, they quietly dock in the base, and on Rogers' count they storm out guns-a-blazin', to find it completely deserted. The team decides to split up in groups of two, all but Cap, having already moved in to investigate, leaving Dugan alone. After searching, Cap finds a deserted lab that looks like a war had torn through it. Searching through the notes, he discovers that they were working on creating a literal HYDRA beast, just as he receives a call for help from Falsworth and Morita, who the creature has in its grip. Trying to save them, he throws his shield to cut through a tentacle but, like the mythical beast's head would, two more tentacles grow back. The creature then drags the two under water. Later Cap comes across the beast, still with Falsworth and Morita, and a fight ensues. The two Commandos escape as Cap stays and fights, when suddenly the beast scrawls "Help Me" in German on the wall. Cap then realizes the beast is the scientists, and with ten seconds until the charges detonate protects it with his shield. The beast lives, and he and the Howling Commandos leave, as he reflects on the horrors of war.

Dernier was a good soldier and a loyal friend, who seems to speak only French. He becomes close to the French-speaker, Gabriel Jones.

As one of the Howling Commandos, Dernier was recognised as one of the best soldiers allied to US Army, and he proves to be an excellent fighter and a highly trained combatant on the battlefield, despite being quite reckless. 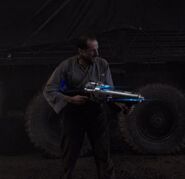 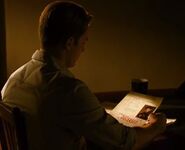