Proudstar's name appeared on a list of mutants on Col. Stryker's computer when it was accessed by Mystique.

In the year 2023, Warpath was part of a small band of mutants who waged a resistance movement against the Sentinels, mutant hunting robots who either killed or imprisoned mutants. In the ruins of Moscow, Warpath, alongside teammate Blink, detected a Sentinel convoy heading towards their hideout, and the pair returned to alarm the rest of the team. Alongside Blink, Colossus and Sunspot, Warpath engaged the Sentinels to buy time for Kitty Pryde to send Bishop into the past to warn their past selves of the oncoming attack. After a Sentinel knocked Colossus to the ground, Blink teleported Warpath on top of the Sentinel and he attacked it. He was left as the last one to defend Kitty and Bishop after the others were killed and he jumped at the Sentinels only to be blasted and killed as well.

However, Pryde and Bishop succeed in their plan, thus erasing the other's deaths. Warpath then travelled with the others to China to rendezvous with Professor X, Magneto, Storm and Wolverine, where they devised a plan to send Wolverine back in time to prevent their dystopian future. While Wolverine was in the past, the others stood guard over him, until Warpath saw a fleet of Sentinel convoys heading towards them. Warpath once again engaged the Sentinels using his combat knife, but was ultimately killed when a Sentinel grabbed him and pushed his head into its energy beam.

Warpath on the cover of Empire. 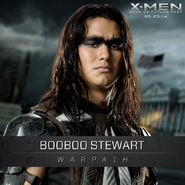 Concept art for Warpath in X-Men: Days of Future Past.