"They stole my life's work, so i don't have much to lose."
―Jane Foster[src]

Dr. Jane Foster is an astrophysicist, who found Thor after he was banished to Earth by Odin.

Jane was among the many who vanished when Thanos completed the Infinity Gauntlet and wiped out half the life in the universe. Five years later, she was resurrected by Bruce Banner via the Nano Gauntlet.

Jane Foster contacted Erik Selvig to ask if he could help her with her investigations.

Jane Foster was travelling in a van with her colleague Erik Selvig and her assistant Darcy Lewis, when a mysterious weather event and the subject of Foster's research unexpectedly resulted in a powerful vortex before them. As they struggled to drive through zero-visibility conditions, the van collided with a man who had stumbled out of the dust and into their path. The man, who only announced himself as Thor, was injured again when Darcy tasered him, prompting them to take him to hospital.

The following day, Darcy made a surprise discovery when she noticed the figure of a man in one of the photographic images captured from the atmospheric event. While Jane realized that the newcomer might be able to shed some light on the event, Selvig was more skeptical. So began a lengthy disagreement between the two, with Foster theorizing about the possibility of an Einstein-Rosen Bridge, while Selvig insisted that everything Thor had been saying about gods and other worlds was nothing more than delusional talk based on old myths. Despite Selvig's concerns, Jane's interest in Thor pushed her to find out more, and the trio set off for the hospital to find the stranger. Once they were reunited, the trio and Thor went to a local diner where Jane pressed him for more information, trying to make sense of what he was telling them. It was there that Thor overheard news of his missing hammer, Mjölnir, and set off on his own to retrieve it. Returning home, Jane and her colleagues found S.H.I.E.L.D. agents confiscating their equipment.

After commiserating with her colleagues over the loss of their property (and telling Darcy to stop going on about her lost iPod), Jane chanced upon Thor again and volunteered to assist him with reacquiring his hammer Mjölnir. This goal proved unsuccessful when Thor, after stealing into the temporary S.H.I.E.L.D. compound that had sprung up around the artifact, found himself unable to lift it and allowed himself to be caught.

Jane enlisted Erik’s help in getting Thor released, which led to a series of events that bonded the expanded group more closely, with Selvig befriending Thor while Foster started to view him as a romantic interest. Their time together was cut short when first, several of Thor's friends from Asgard arrived to take him home, and then The Destroyer (a very large battle automaton robot) arrived to stop him from returning to Asgard.

Thor ultimately beat The Destroyer. His willingness to sacrifice himself in the protection of those around him proved his worthiness of Mjölnir, which he regained along with his full power as the God of Thunder. Jane finally saw what he really was for the first time, but with the return of Thor's power came the return of his responsibility to his realm and his people. She was forced to say goodbye as Thor returned to his home.

Jane continued with her research to find a way to bring Thor back to Earth. She tried to open a wormhole but failed. Darcy tried to convince her to wait, because Thor promised he would return, but Jane worried that he might not, and decided to not give up.

One year later, Thor's brother Loki came to Earth, so S.H.I.E.L.D. contacted Jane and sent her to an Astrophysics Lab in Norway to keep her safe.

Thor asked about Jane's whereabouts when he returned to Earth to bring Loki back to Asgard. Phil Coulson revealed that she, like Erik Selvig, was now working for S.H.I.E.L.D. and that she had been placed in a secret location (Tromsø, Norway) to protect her after Loki took Selvig.

In Tromsø, Jane became frustrated due to no-one giving her a reason for her being there. She confronted one of the scientists when Darcy interrupted her to show her live footage of Thor in Manhattan.

Jane and Darcy flew to New York where Jane promised Erik Selvig that she'd look after him, before realizing that Thor had already returned to Asgard.

"We're from different worlds, maybe they were separate for a reason."
―Jane Foster [src]

Jane Foster is an astrophysicist who met Thor when he was exiled to Earth by his father. The two had an intense attraction in the short time they were together, and through Jane, Thor learned the value of humility and the heroic nature of humanity. After being separated since Thor’s first visit to Earth, Jane has moved on with her life. However now she finds herself pulled into Thor’s world once again by an ancient evil.

Jane was mentioned by Thor at Tony Stark's party and he bragged about her laudable work in the scientific field.

Jane was preparing to lecture on her experiences with interspace and dimensional travels.

It was revealed that Jane and Thor have broken up.

Five years after the Decimation, a drunken Thor mentioned Jane's encounter with the Aether as a time when the Reality Stone's location was known. Thor called Jane both an old flame and his ex and went into a bit of a drunken ramble about her.

In order to get the Reality Stone, Thor and Rocket returned to 2013 to extract the Aether from Jane.

Jane was restored along with the fallen heroes and everyone else lost in the Decimation by the Bruce Banner/Hulk.

Jane is a strong and determined woman, with an obstinate will and an independent spirit. She firmly believes that scientists have been invested with the mission of searching the truth and loyally follows this idealism. She possesses a deep knowledge for her study field, astrophysics, and of her peers. She came the closest to discovering the existence of Asgard by studying the wormhole-like traces left by the use of the Bifrost Bridge.

Jane Foster in a cafe. 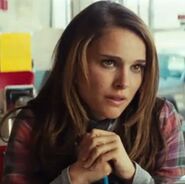 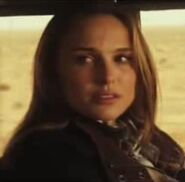 Jane asking Thor who he is. 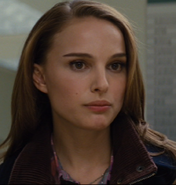 Jane witnessing the arrival of Thor on Earth.

Jane and Thor in Asgard.

Jane Foster with Thor in Asgard.

Jane with Thor in Asgard.

Jane being kidnapped by Malekith.

Jane with Thor and Loki.

Close-up of Jane being kidnapped.

Malekith and the other Dark Elves capturing Jane.

Jane and Darcy on Earth.

Jane with Odin and Thor in Asgard. 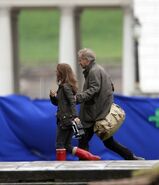