Jasper Sitwell was an espionage agent working for S.H.I.E.L.D. who was actually working for HYDRA.

I Am Iron Man!

Sitwell was assigned to the surveillance of Bruce Banner. Even when the World Security Council ordered him to stop his mission, Nick Fury ordered him to keep an eye on the scientist. When Phil Coulson discovered a mysterious alien device landed in New Mexico, Sitwell was re-assigned and left Banner's surveillance to Natasha Romanoff.

Sitwell was sent to New Mexico after Agent Coulson found Mjölnir in the desert. He was among the S.H.I.E.L.D. agents who confiscated Jane Foster's research on wormholes.

Sitwell was head of the lab studying the hammer-like artifact found in the crater who also witnessed the intrusion of "Donald Blake" into the base. When "Blake" is finally apprehended, Sitwell was present when Coulson interrogated him.

When another wormhole was opened in the desert, Sitwell, Coulson and some other agents went to the location and saw the arrival of The Destroyer. He asked Coulson if the robot is something of Stark's, but Coulson responded that Stark never told him anything. Immediately after, The Destroyer started a massive attack against the agents, and Sitwell was among the survivors.

Agent Sitwell summoned Agent Coulson to a meeting in a cafe to discuss a major problem: the World Security Council wanted Emil Blonsky freed from custody and integrated into The Avengers Initiative. The two of them, knowing the truth about The Abomination, thought of a plan to avoid Blonsky's liberation, and decided to send The Consultant to annoy General Ross, who had Blonsky in custody, to the point that he would never release his prisoner.

Sitwell kept serving under S.H.I.E.L.D. and was seen as a computer expert on the S.H.I.E.L.D Helicarrier. He was the agent who located Loki in Stuttgart. During Hawkeye's attack on the ship, Sitwell's abilities were essential in regaining the control of the Helicarrier despite the heavy damages.

Later, Sitwell and Strike went to Stark Tower to retrieve the Chitauri Scepter and delivered it to Dr. List.

"We all miss him."
―Jasper Sitwell[src]

Agent Sitwell was ordered by Agent Blake to capture two bank robbers, who had at their disposal the only Chitauri gun, among the 47 retrieved on Earth, which was still functioning. Sitwell managed to anticipate the robbers' movements and reached them in a motel, with the order of collecting the weapon and killing the robbers.

Once at the motel, Sitwell took the room next to Benny and Claire's, disturbing them with loud music. Benny knocked on Sitwell's door to ask him to lower the volume, but Sitwell easily knocked him out and restrained him. Benny managed to warn Claire, who attacked Sitwell with the alien gun. During the following fight, the gun got broken and shot automatically, destroying most of the room. After that, Sitwell secured Benny and Claire and prepared to follow his orders, until he discovered that the gun was only working because Benny had repaired it.

Seeing a potential in the couple, Sitwell recruited Benny and Claire in S.H.I.E.L.D. instead of killing them, much to Blake's disappointment.

Sitwell was assigned to The Hub, S.H.I.E.L.D.'s primary operational staging and support center under Agent Victoria Hand. He was present during the first briefing for the mission to disable the Overkill Device in South Ossetia. After the mission began, he caught Agent Jemma Simmons attempting to break into The Hub's mainframe and was rendered unconscious by her. Sitwell was taken to the infirmary, and after his recovery, he asked Agent Hand about the extraction of agents Leo Fitz and Grant Ward, as he believed there wasn't going to be one. Hand revealed that she trusted that Coulson would extract his own team.

Agent Coulson met up with Sitwell in a parking garage to ask where Nick Fury was. Sitwell replied that Fury doesn't let people find him and that he finds them. Sitwell also asked Coulson about Tahiti, in which Coulson replied "it sucked".

"End of the Beginning"

Sitwell with Victoria Hand, Felix Blake, and John Garrett met with Coulson's Team aboard the Bus in hopes of locating the Clairvoyant. However, Sitwell received an order from the Triskelion to report to the Lemurian Star.

Agent Sitwell was taken hostage on the Lemurian Star by Georges Batroc and his pirates. Before the negotiations were complete, Sitwell and the hostages were saved by Captain America and the S.H.I.E.L.D. Strike team.

Sitwell returned to the Triskelion and was assigned to the security of Senator Stern. Both Sitwell and Stern were undercover HYDRA agents, and Sitwell took an active role in the hunt of Captain America and his allies after Nick Fury's apparent death. When in the company of Stern, however, Sitwell was captured by Rogers, Romanoff and Sam Wilson, who were looking for answers. Natasha threw Sitwell off of the roof to encourage him to talk. He was saved by Wilson who was using a flight pack. Sitwell revealed to them that the new Helicarriers were programmed to kill individuals considered to be actual or potential threats to HYDRA, including Tony Stark, Bruce Banner, President Ellis and Stephen Strange. Sitwell expressed fears that Pierce would kill him for revealing the truth about Hydra's intentions.

When Rogers and his allies attempted to return with Sitwell to the Triskelion and use him to access further information, the Winter Soldier attacked their vehicle and silenced Sitwell by throwing him in front of a passing truck.

During the 2012 Time Heist, Captain America retrieved the Chitauri Scepter from that new timeline's Jasper Sitwell.

Jasper was a highly trained professional agent, dutiful and skilled as a high-level agent should be. He seemed to be an expert in scientific issues, and often worked with Phil Coulson. However, Jasper was revealed to be a mole working for HYDRA. 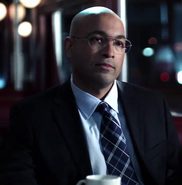 Sitwell and Coulson
Add a photo to this gallery

Filming.
Add a photo to this gallery
Retrieved from "https://marvel-movies.fandom.com/wiki/Jasper_Sitwell?oldid=267507"
Community content is available under CC-BY-SA unless otherwise noted.