"You are deluded, Captain. You pretend to be a simple soldier, but in reality, you are just afraid to admit that we have left humanity behind. Unlike you, I embrace it proudly. Without fear!"
―Red Skull[src]

Johann Schmidt, also known as the Red Skull, is a German ex-SS officer and scientist who had his own branch of the Third Reich Army under his command known as HYDRA in the 1940s. After unintentionally activating the Tesseract, Schmidt was transported to the planet Vormir where he was punished by becoming the Stonekeeper of the Soul Stone, an Infinity Stone that he had no hope of ever obtaining because it required the sacrifice of someone you loved.

In February 1934, at the Deutsches Opernhaus in Berlin, Schmidt met Adolf Hitler, the Führer of Nazi Germany, the Third Reich. With him were Heinrich Himmler, head of the Schutzstaffel, and Ernst Kaufmann, head of the Sturmabteilung (SA)'s Special Weapons Division. Schmidt revealed them his theory that magic could be “the oldest science ever known”. Hitler was intrigued by Schmidt's ideas, but Kaufmann was less impressed. Schmidt offered to conduct research in Kaufmann's unit, but was violently rejected. However, Himmler was more interested in Schmidt's ideas, and took him under his wing.

In June 1934, as part of the Night of the Long Knives, Schmidt assassinated Kaufmann and seized control of his weapons program. A week later, Schmidt and his SS troops attacked the SA Weapons Testing Ground at Kummersdorf (46km south of Berlin). After killing almost the entire personnel of the base, Schmidt found and recruited Arnim Zola, a scientist who worked on the advanced exo-skeleton battle armour. Eventually, Schmidt rose to the rank of Obergruppenführer (Lieutenant general), and formed his own branch of the SS, HYDRA.

In September 1935, the German biochemist Abraham Erskine attempted to flee Germany with his family. His wife's father was a Jew and Erskine wanted to take his family to safety. They were stopped at the German/Swiss border by Schmidt and his men. Schmidt wanted Erskine's work on ways to increase molecular density of cellular fibers through synthetic proteins. In order to ensure Erskine's cooperation, Schmidt sent Erskine's wife Greta and his children Klaus and Marlene to the Dachau concentration camp. Arnim Zola was allowed to resume his work on exo-skeleton battle suits and various high-tech weaponry.

In 1940, the first, unstable version of Erskine's Super Soldier Serum was finished. At castle Kaufmann in the Bavarian Alps, Schmidt injected himself with the serum. The serum was supposed to make him faster, stronger, and more agile. It worked but not without cost. His face was burnt and deformed, making it red, looking like skull. Though he adopted a synthetic mask that resembled his former appearance to disguise the deformity, he gained the nickname "Red Skull". Erskine ran away to America with the help of Peggy Carter and joined the Strategic Scientific Reserve.

Johann Schmidt was an SS officer who reached the rank of Obergruppenführer (Lieutenant General) and got into Hitler's inner circle. He was the first man in centuries to be completely aware of Norse Gods having roamed the Earth and sought to harness the science behind their power. Then he created his own branch known as HYDRA, named after the mythological creature, which became Hitler's deep science division. Dr. Abraham Erkshine had been forced to test the super soldier serum on Johann Schmidt, corrupt and greedy for power. After the serum had been used on Schmidt, he not only developed a darker nature but also suffered physical side effects. After his head was severely deformed into a skull-like form, Schmidt became disillusioned from Hitler's ideals of Aryan supremacy and distanced himself from Naziism.

Schmidt then invaded a castle in Norway searching for a mystical artifact he calls "The jewel of Odin's treasure room". The Tesseract is said to give it's finder unbelievable power and Schmidt believed it would give him power. A member of a group sworn to protect it tries to stop him from stealing it but Johann shoots and kills him without mercy. Schmidt and Nazi scientist, Arnim Zola experiment with the artifact which is really the cosmic cube and attempt to harness its power. Then they started to create their own wunderwaffe using the Tesseract's power. Schmidt executed three Nazi officials to declare that HYDRA has become independent and will no longer aid the Third Reich. Schmidt reveals that his cause is looking beyond Hitler's plans and imagination, and that HYDRA won't grow up under Hitler´s shadow. So he becomes an enemy and traitor of the Axis powers.

While on an unauthorized rescue mission, Steve Rogers briefly confronted Schmidt. Schmidt tore away the skin on his face revealing his deformed face. The Red Skull grew frustrated as Captain America destroyed all but one of his factories, killing those who failed to stop him. After the Howling Commandos captured Zola, Rogers led an attack on the Red Skull's last fortress. The Red Skull then took off in his jet to destroy the US with the energy from the cosmic cube.

After the suicide bombers are neutralized, the Red Skull and Captain America fought within the cockpit ending in a stalemate as the battle damaged the cube power core. The Red Skull picked up the Cube, forgetting that it cannot be held by mortal hands. Thus the Cube seemingly incinerated Schmidt and transported his remains across space toward Yggdrasil.

In April 1944, Schmidt was in a castle on an island in the Nazi occupied Danish Straits. There, he studied a mystical Viking runestone. However, Rogers and the Howling Commandos invaded the castle. Schmidt attempted to destroy them but they survived.

After the Allied invasion of Normandy, Schmidt made an unholy alliance with the German nobleman Baron Zemo. But soon, Schmidt crossed Zemo and HYDRA occupied Zemo's castle in Bavaria. When Rogers invaded the castle and defeated Zola's henchmen like Baron Wolfgang von Strucker, Schmidt brought the Tesseract, intending to use it to activate the Sleeper, the gigantic robotic war machine hidden beneath Castle Zemo. He also wanted the upgraded Super Soldier serum Zola synthesized from the Captain's blood. Captain America destroyed the sample, enraging Schmidt who ordered Iron Cross to kill him. When Captain America defeated Iron Cross, Schmidt escaped and activated the Sleeper. Cap destroyed the Sleeper, which also led to the destruction of the castle. Later, Schmidt told Zola to stop wasting time on failed projects.

"You know, the last time I was in Germany and saw a man standing above everybody else, we ended up disagreeing."
―Steve Rogers[src]

When Captain America faced Loki in Stuttgart, Germany he referred to Schmidt.

Even though the Red Skull had long been declared dead, his legacy and influence had remained. While investigating an old S.H.I.E.L.D. bunker, Steve Rogers and Natasha Romanoff encountered the now AI Dr. Zola. Through him they learned that HYDRA had been reborn and growing within S.H.I.E.L.D. ever since the agency's conception after Zola and several other "repentive" HYDRA members were brought in for being strategically valuable. Through them, HYDRA's power and influence over the world grew and were the reason for much of the international corruption, violence, and hostility in the second half of the 20th century.

Despite what Steve Rogers and HYDRA thought, the Tesseract didn't kill Schmidt, but rather transported him to the planet Vormir, where he became the guardian of the Infinity Stone know as the Soul Stone. The Soul Stone required someone to sacrifice a person that they loved to acquire it but because Schmidt loved no one but himself, he could not acquire the stone thus leaving him trapped on Vormir for decades. When Thanos and Gamora came to Vormir, Schmidt greeted them and explained to them how to retrieve the stone.

A 2014 alternate version of the Stonekeeper was part of one of the Avengers' time heists in which the Soul Stone was taken by Clint Barton years before Thanos even learned the location.

Johann Schmidt is a megalomaniac and egocentric genius who firmly believes in the concept of Social Darwinism, specifically that a race of superior humans are destined to rule the normal ones and was initially a firm supporter of Hitler's goal to create an Aryan master-race before being segregated for his deformities. Using both magic and science to obtain a central position in the Third Reich's inner-circle, Schmidt's conceit arrived to the point of believing that he was greater than Hitler himself, thus starting a plan to overthrow him. Schmidt is pitiless and cruel, but also a scientific genius able to see beyond appearances and identify the truth behind myths and superstition as fragments of Asgardian origin.

As a result of the formula developed by Abraham Erskine, he obtained incredible attributes, such as enormous strength, speed, stamina reflexes, and even got his intelligence increased, becoming a war mastermind. But the serum was still incomplete and imperfect when Schmidt hastily used it on himself. According to Erskine, because the serum wasn't ready, "good becomes great, bad becomes worse". As a result, his entire head became horribly disfigured, resembling a crimson skull, and his insanity and megalomania became magnified. Schmidt considered his grotesquely inhuman face as proof that he has left humanity behind and has truly become a god.

In combat, he uses canonical firearms, but after retrieving the Tesseract, he gained access to a source of energy the likes of which has never be seen, and used it to implement his weapons. Though he is disillusioned by the Fuhrer's ideals, he is still morally devoid and capable of mass murder.

Schmidt with the false cosmic cube. Note the seams on his mask.

Schmidt with a false Cosmic Cube.

Schmidt as an SS Obergruppenführer

Schmidt injects himself with Erskine's serum

Schmidt and his former Nazi commanders.

Red Skull at his desk

The Red Skull at a destroyed HYDRA base.

The Red Skull at a destroyed HYDRA base.

Red Skull with the Tesseract.

The Red Skull being transported to one of the Nine Realms.

Captain America vs. The Red Skull. 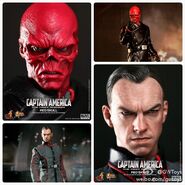 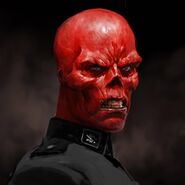 Johann Schmidt and his soldiers attack the SA weapon facility.