Bill Paxton
Jonathan "John" Garrett was a S.H.I.E.L.D. agent and Grant Ward's former supervising officer, but was revealed to be working with HYDRA and is the mysterious head of the Centipede Group, the Clairvoyant, and was the first Deathlok.

After Coulson's team brought Ian Quinn into their custody, Garrett and Antoine Triplett were sent to the Bus by S.H.I.E.L.D in order to bring Quinn into official S.H.I.E.L.D custody. After making a deal with Coulson to keep Quinn there in order to help Skye, Garrett went with Coulson, Ward and Fitz to raid the Guest House and find GH-325, the mysterious serum that helped heal Coulson's dead heart. After detonating the planted explosives and making it back to the Bus, Garrett and Triplett brought Quinn into custody and took him to the Fridge.

"End of the Beginning"

Due to Deathlok's suspected involvement with Ian Quinn, Garrett and Triplett had no difficulty being assigned to take point on the hunt for Peterson. Deathlok attack the safehouse in Sydney, Australia where he and Triplett were hiding. Later, Coulson calls a meeting for agents Felix Blake, Jasper Sitwell, Garrett and Victoria Hand above aboard the Bus. There, they are briefed on the possibility of the Clairvoyant being a psychic, hence the need to be out of range and in the air. The agents are grouped into teams of two, with one agent having the name of a certain suspect and the other having the location of said suspect. While Ward went with Triplett and May went with Agent Blake, Garrett went with Coulson to locate Noriko Sato, a possible suspect to be the Clairvoyant. Quickly, they notice conveniently placed and timed roadblocks obstructing their path, and notice that multiple cars attempt to corner them. Realizing that they are compromised, the agents drive off. After tracking Deathlok's location into an abandoned building, the agents are eventually led straight to Thomas Nash, who seems to speak using computer monitors. After giving veiled threats to Skye's life, Ward loses control and coldly kills Nash with a bullet to the chest, shocking Coulson's team watching. Garrett left Ward in Coulson's charge and flew off by himself, only to be attacked suddenly by two S.H.I.E.L.D. drones.

Garrett has been dying due to the robotic implants making his organs fail. As he is dying, Raina injected a synthesized copy of GH.325 into Garrett.

Garrett was a skilled specialist S.H.I.E.L.D. agent, who prefers field work to desk jobs even after his promotion to Level 7. He disdains authority except when it suits him to follow protocol, and is not afraid of using violence during interrogation, though he has also described himself as being able to be persuasive when he wants to be.

However, in truth Garrett is a HYDRA sleeper agent. And he is the leader of the Centipede Group known as "The Clairvoyant". 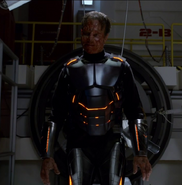