Jonathan "Johnny" Storm, also known as the Human Torch, is a superhuman who can generate and manipulate fire. He is also a member of the Fantastic Four.

When Johnny got hit by the cosmic radiation that gave the Fantastic Four their powers, Johnny gained the power of pyrogenesis, pyrokinesis, fire mimicry and flight.

When Sue and Reed's wedding was interrupted by the Silver Surfer, Johnny pursued the Surfer and lost the subsequent confrontation. Due to his contact with the Surfer, Johnny was thereafter able to switch powers with any of his teammates through physical contact, though he loses this ability after his second contact with him, just before the Surfer confronted Galactus.

Johnny differs from his fellow teammates by being very immature and hedonistic. He is into extreme sports and enjoys thrills, however, foolhardy or poorly thought out they may be.

The Human Torch flying through the city. 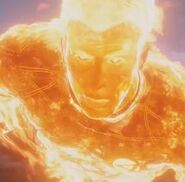 Johnny using the combined powers of the Fantastic Four.