Start a Wiki
watch 01:21
The Loop (Movies)
Do you like this video?
Jubilation Lee, also known as Jubilee, is a mutant with the ability to create electrical arcs and colorful pyrotechnic energy. She can also use this energy to hack electronics, as seen when she uses her powers to allow Jean and Scott to play an arcade game without using any quarters.

Jubilee, along with Kitty Pryde and a few other students were being taught by Charles Xavier when Wolverine found his way into Xavier's office.

Later, Jubilee attended Storm's lesson, in which she answered a question about the Roman Empire. She wrote notes while Rogue and Bobby Drake spoke to each other, and asked Rogue about Wolverine's mutation. When Rogue took Wolverine's powers on accident after waking him up during a nightmare, Jubilee was one of the teens that rushed to the scene to witness the incident.

Jubilee attended a school trip to the Natural History Museum, where she read about evolution. This forced her to consider her own situation as a mutant causing her to unconsciously activate her powers. Professor Munroe called her and she rejoined the rest of the group.

She was among the students kidnapped from the X-Mansion by William Stryker's men and taken to Weapon X' base at Alkali Lake. She and the other students were later rescued by Nightcrawler.

After the incident at Alkali Lake, Jubilee returned to attending Xavier's Institute as a student. Noticing that Charles Xavier was saddened due to Jean Grey's sacrifice, she kindly asked him if everything was alright.

Jubilee returned to school in the X-Mansion after the Alkali Lake incident. She attended Professor X's funeral and came back to school when Storm reopened it after the hiatus during Alcatraz battle.

When old Xavier meets with young Xavier, he shows his younger self a vision of students that he will possibly have in the future. Jubilee is seen in this moment, walking into Xavier's classroom. She is wearing her green jacket, blue jeans, ponytail and hoop earrings.

Jubilee participated in a lecture on 'The Once and Future King,' in one of Xavier's classes, speaking in excitement on her knowledge of the topic. Later, after Hank McCoy gave Scott Summers glasses to control his powers, Jubilee notified him that a female friend had come to visit him at the mansion. Jubilee guided Kurt Wagner, who arrived with Mystique, through the mansion just after he arrived from Berlin. She told him about the library and cafeteria, and also that she was born in Beverly Hills. She introduced him to her friends Scott and Jean Grey, before Scott suggested that they show Kurt some fun by going to a mall. With the mall being one of Jubilee's favorite places to hang out, the mere thought of this made her smile from ear to ear. The four friends walked around the mall corridors, and as Kurt stopped to check out some aerobic workout videos, Jubilee playfully pulled at his tail so he would stick with the group. They all stopped to play games at the mall arcade, and Jubilee used her powers to hack Scott and Jean's game so that they could keep battling one another, making them smile and thank her in gratitude. She then read off times for the newest Star Wars film while they drank smoothies in the food quart, and looked in humor as Kurt freaked out about getting 'brain freeze.' Jubes then cheered on some breakdancers with her friends before going to the theater. After watching Return of the Jedi at the mall, Jubilee told Scott that she still felt that Empire Strikes Back is her favorite of the Star Wars films, as it is the most dynamic and complex, and isn't afraid to end on a bad note. As the four friends drove back to the mansion, Quicksilver arrived just in time to use his super speed abilities to save the students at the mansion from an explosion brought on by the arrival of Apocalypse and his Horsemen. After the destruction, Jubilee and the others returned to find that the mansion has been destroyed. While Scott, Jean, and Nightcrawler ran off to find Havok, Jubilee joined Moira, Beast, Quicksilver, Mystique and the surviving students. She, and the other people in her group were all knocked unconscious by General Stryker, so that he could easily apprehend the adult mutants and Moira for research. As Jubilee woke up, she looked off into the distance to see Stryker's helicopter fly away with all of her friends on board. After the X-Men defeated Apocalypse, Jubilee stood next to Nightcrawler and watched as Jean Grey and Magneto used their powers to rebuild the mansion. She also got to witness Beast giving Scott his new visor, before calling himself Cyclops.

Jubilee is an intelligent, compassionate, and fashionable student of Xavier's in all of her movie appearances. She is the first to raise her hand when a question is asked, and cares enough to show concern for her mentors when they are in distress. As seen in the Natural History Museum in X2: X-Men United, Jubilee seems to consider the mutant race as a natural evolution of homo sapiens sapiens. Jubilee is used in a viral video for Fox Studios to promote X-Men: Apocalypse, in which she stars in an infomercial to attract new students to Xavier's School for Gifted Youngsters. This video shows Jubilee befriending young mutants, talking about her experiences at the school, and explaining what the Institute offers to students. She is cheerful, kind, and full of energy. 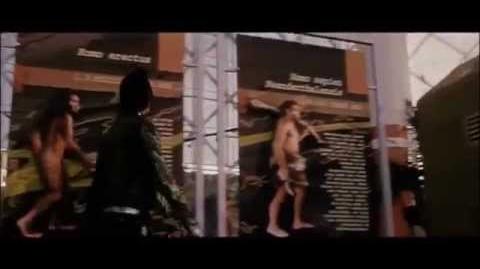 Retrieved from "https://marvel-movies.fandom.com/wiki/Jubilation_Lee?oldid=265524"
Community content is available under CC-BY-SA unless otherwise noted.