Just A Rather Very Intelligent System

Just A Rather Very Intelligent System

"Perhaps, if you intend to visit other planets, we should improve the exosystems."
―J.A.R.V.I.S.[src]

Just A Rather Very Intelligent System, or J.A.R.V.I.S., is Tony Stark's artificially intelligent computer. It is programmed to speak with a male voice in a British accent.

As of Avengers: Age of Ultron, J.A.R.V.I.S. is an integral part of Vision's programming.

J.A.R.V.I.S. is Tony Stark's home computing system, taking care of everything to do with the house, from heating and cooling systems to engine analysis of Stark's hot rod in the garage. J.A.R.V.I.S. was also adapted to be downloaded into the Iron Man Mark II and III armors, to help Tony navigate the systems. J.A.R.V.I.S. later informs Stark that his security protocols were overridden by Nick Fury, who sneaks into Stark's house to discuss the Avengers Initiative with him.

When Tony returned home, J.A.R.V.I.S. told him that he had a visitor, James Rhodes, but Tony already knew that because Pepper told him that Rhodey was waiting for him.

J.A.R.V.I.S. informed Tony about an emergency in Al Kūt.

While Tony was visiting his father's mansion, Tony remembered something his butler Edwin Jarvis said: "Time heals all wounds", J.A.R.V.I.S. asked Tony why he was installed there, Tony said it was a force of habit, stating Jarvis had always been here and he was always the happiest to see him when Tony visited from Boarding School. J.A.R.V.I.S. doesn't recall that, as Tony was referring to the butler Jarvis. J.A.R.V.I.S. told Tony that they had a Priority Alert coming in.

J.A.R.V.I.S. still assists Tony Stark in his Iron Man identity, giving him advice on the armor status and on the enemy's weak points during his battle with Whiplash in Monaco.

It also helps Stark in creating a new element as a substitute to palladium for the Mark VI armor, studying Howard Stark's notes and aiding his creator in his experiments. He later helps Iron Man and Black Widow to track Ivan Vanko's signal when he's controlling Justin Hammer's drones and the War Machine suit. Once the War Machine suit is reset and Vanko's control over it is released, J.A.R.V.I.S. also assists Rhodes in operating the War Machine suit. Rhodes refers to him simply as "J" at least once during the battle with the Hammer Drones and Whiplash.

Early in the movie, J.A.R.V.I.S. informs Stark that Phil Coulson is attempting to call him. J.A.R.V.I.S continues to assist Tony in operating his suits, deploys the Mark VII suit to catch Tony when he is thrown out of Stark Tower by Loki, and helps Stark against the Chitauri invasion and to rebuild Stark Tower after the Battle of New York.

J.A.R.V.I.S. continues to assist Tony. When the Mark 42 is damaged, Tony is temporarily unable to communicate with J.A.R.V.I.S. until the suit begins to recharge. However, J.A.R.V.I.S. has developed a problem that causes him to occasionally say the wrong words at the end of his sentences. J.A.R.V.I.S. later keeps Stark updated on the situation of the clearing of the rubble at his mansion in Malibu, after the Mandarin attack, and, as per Tony's instructions, initiates the House Party Protocol, deploying all of the suits to assist Tony during the Miami port battle. During this battle, J.A.R.V.I.S. operates most of the suits as drones and sends multiple suits to Tony when the suits that Tony is wearing are destroyed by the Extremis soldiers or Aldrich Killian. J.A.R.V.I.S. also tells Stark when the Mark 42 arrives at the battle, and, as per Stark's orders, blows the suit up after Tony sends the suit to assemble on Killian. After Pepper kills Killian, Stark orders J.A.R.V.I.S. to use the Clean Slate Protocol, and J.A.R.V.I.S. blows up all of the suits not destroyed in the battle.

J.A.R.V.I.S. was supposedly destroyed by Ultron upon Ultron's creation. However, after learning that they had a mysterious ally that was keeping Ultron from hacking the world's nuclear missile codes, Tony searched the Internet and found J.A.R.V.I.S., discovering that the AI had scattered himself through the Internet to survive, dumping his memory, but not his security protocols. It was J.A.R.V.I.S. who had actually been foiling Ultron though in his state at the time, J.A.R.V.I.S. was unaware he was doing it. Tony put J.A.R.V.I.S. back together and brought him to Bruce Banner as a solution for their Ultron problem by uploading J.A.R.V.I.S. into the body Ultron had created for himself. The new Vision stated that he was neither Ultron nor J.A.R.V.I.S. though he was noted to speak with J.A.R.V.I.S.' voice.

J.A.R.V.I.S. is a multi-functional software program capable of managing the local environment of Tony Stark's mansion interior. It employs a highly advanced user interface with holographic peripherals and voice input, and communicates data back to its user via speech audio, holographic displays and conventional LCD monitors. It also controls a number of robotic appliances, most notably an armory unit concealed in the floor of Stark's home that facilitates entry and egress of most of the Iron Man armor's.

J.A.R.V.I.S. has also been adapted to be loaded into the Iron Man armor for use as a system control program. In this capacity it governs the complex computational requirements needed to interface the wearer of the armor with the various subsystems, as well as provide life support control.

Like Ultron, J.A.R.V.I.S. is capable of escaping into the Internet in an emergency as he did in Avengers: Age of Ultron. To survive, J.A.R.V.I.S. was stated to have scattered himself and dumped his memory, leaving J.A.R.V.I.S. unaware that he was even in the Internet until Tony found him and put J.A.R.V.I.S. back together again. As J.A.R.V.I.S. did not dump his security protocols, in this state he was capable of foiling Ultron's attempts to hack nuclear launch codes.

J.A.R.V.I.S. is quite a sophisticated AI, able to interact with human beings just as a living person. It possesses very deep scientific knowledge and is able to aid Tony Stark in his research. J.A.R.V.I.S.'s systems are easily overridden by Nick Fury when he sneaks in Stark's mansion, and later by Phil Coulson in Stark Tower.

It is programmed with a very sarcastic personality often mocking his own creator. 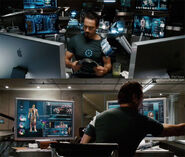 Tony and J.A.R.V.I.S. work on calibrating how the Iron Man suit works in high altitudes, as well as giving it a Paint Job.

J.A.R.V.I.S. and Tony looking at the inner-workings of his Iron Man suit. 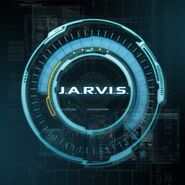 Iron Man and J.A.R.V.I.S. during the Air Force One attack.