Agent 33 was captured by HYDRA after the fall of S.H.I.E.L.D. and was being brainwashed by Daniel Whitehall. She tried to resist the brainwashing, but was unable to.

Coulson mentioned to Skye that Agent 33 was one of the best S.H.I.E.L.D. agents before S.H.I.E.L.D. was taken down.

Sometime later, Agent 33 walked into Whitehall's office to give him a file, saying that she was happy to comply.

Agent 33 was in the hotel room with Bakshi as she started the process of using the Photostatic Veil to look and sound like Agent May. She took out two folders containing all the information on Coulson and May. When May went into the hotel room and found Agent 33, she attacked, but the fake Talbot, confused Agent May allowing Agent 33 enough time to knock her out.

Agent 33 then used the veil to pretend to be Agent May. As Agent May, Agent 33 entered The Bus and planted a computer virus in its systems. She asked Coulson to accompany her to the hotel room. However, Coulson was able to deduce that the person he was with was not Agent May and she attacked Coulson.

Agent May was able to escape capture from Bakshi and began to fight Agent 33 disguised as her. Using a cord Bakshi was going to use to brainwash her, she used the cord on Agent 33 and burned the veil onto her face. 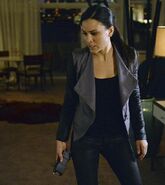