"Well, let's just say I know a little girl who can walk through walls."
―Charles Xavier[src]

Katherine "Kitty" Pryde is a mutant who can phase through solid matter and send other individuals' minds through time. She is also a member of the X-Men.

Kitty is a student at Xavier's School for Gifted Youngsters. She is from Illinois.

Senator Kelly referenced as "the girl who can walk through walls" in Congress. She can briefly be seen in Xavier's class at the beginning of the film.

Kitty phases through walls and through people to escape William Stryker's military forces during their attack on the X-Mansion. Another scene shows her falling through her bed to avoid an assault. She shares a room with Siryn because her phasing ability gives her partial protection from Siryn's scream. When the President of the United States asks Professor Xavier how he got the files he gave him, Xavier replies that he knows a little girl that can walk through walls.

"Who's hiding... dickhead?"
―Kitty to Juggernaut[src]

Several months later Kitty became a full memembers of the X-Men. She also became indirectly a rival of Rogue for the romantic attentions of Iceman. After the death of Charles Xavier, Kitty along with the rest of the students was at the funeral hearing Storms Eulogy to the Professor and mourning him. Later at night a devastated Kitty continued to mourn Xavier when Bobby stopped by her room to check up on her. Wanting to cheer her up Bobby took her to the fountain outside the mansion and solidified it making a makeshift ice skating rink. After skating for awhile and enjoying herself a cheered up Kitty then thanks Bobby for his kindness. When Magneto and the Brotherhood went to Alcatraz Island in order to kill a young boy named Leech who was the source of the mutant cure Kitty joined the X-Men in the battle on Alcatraz Island, breaking off from the battle to save Leech from the Juggernaut. Using her phasing abilities Kitty manages to get to Leech first however she is unable to escape with him due to Leech suppressing her powers. When Juggernaut arrives realizing that Leech abilities will have canceled out his superhuman strength Kitty goads him into attacking them. As Juggernaut charges at them Kitty moves them out of the way just as Juggernaut crashes into the wall and knocks himself out on impact. When Jean Grey unleashes the full Phoenix Force, Kitty assist in getting as many people to safety as she can until Wolverine is finally able to stop the destruction by killing her.

The next day on the mansion's front lawn, Ororo and Kitty stand in front of the two graves of Scott Summers and Jean Grey, lying next to Xavier's grave – three great losses that the X-Men are left to mourn.

"Basically your body goes to sleep while your mind travels back in time. As long you back there, past and present will continue to co-exist."
―Kitty Pryde to Logan[src]

Kitty, Iceman, and Peter Rasputin met up with Bishop, Sunspot, Blink, and Warpath. They formed a plan to survive; they continuously move around the world. Warpath can sense Sentinels so whenever they found the group, they fought them off as much as possible while Kitty sent Bishop's consciousness back in time a few days ago to alert the others so they move to a different location. Eventually they met up with their old teachers Storm, Professor X, Logan and Magneto. They met up so they could send Charles' mind back to 1973 to change the past so this future never happened. However, Kitty told Charles that the most anybody can survive is a month as any more than that would destroy the brain. Logan, however, volunteered as his mind could withstand that.

Kitty sent Wolverine back to 1973. During this, Logan met Stryker and in his anger, he stabbed Kitty before Magneto restrained him. Bobby tried to convince them to let her rest as she was losing a lot of blood but they tell him that they have to continue or else they might never escape. Meanwhile, the Sentinels attacked the X-Men and eventually broke through the vault that held them. They were about to execute the X-Men but Logan had been successful in changing the timeline.

Sumela Kay as Kitty Pryde.
Add a photo to this gallery

Katie Stuart as Kitty Pryde.
Add a photo to this gallery 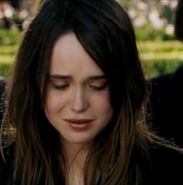 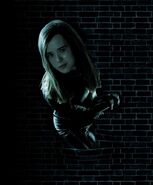 Promotional Image of Kitty phasing.
Add a photo to this gallery 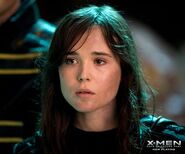 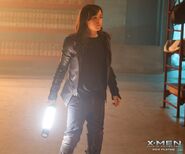 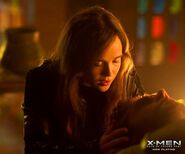 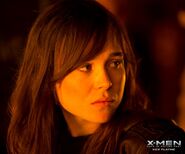 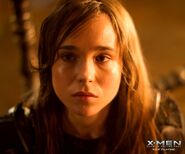 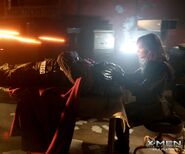 Kitty on the cover of Empire.

Elliot Page on set as Kitty.

Jerad Marantz concept art.
Add a photo to this gallery

Retrieved from "https://marvel-movies.fandom.com/wiki/Katherine_Pryde?oldid=284881"
Community content is available under CC-BY-SA unless otherwise noted.