"Jessica, I know your secrets, I know about your friends, about your gifts, Jessica, Jessica Jones, I know everything"
―Kilgrave[src]

Kevin Thompson, known as Kilgrave, was a British man with the ability to control people's minds. He was a figure from Jessica Jones' past, who came back to haunt her.

Kevin Thompson was the son of the British scientists Albert and Louise Thompson. Kevin had a serious brain malfunction which would have caused him to be brain dead at twelve. His childhood hero was a rugby player named Eric Brantford. As a child, Kevin underwent heavy treatments which were required for his brain condition. Many of the treatments were highly painful and he even had spinal fluid removed. His own father experimented on him and his treatments caused him to develop mind control abilities. Kevin had tantrums and controlled his parents, even making his mother burn her own face with an iron, permanently scarring her. Due to fear, his parents abandoned him at the age of ten and he lived on to fend for himself. He eventually took on the alias of Kilgrave to conceal his identity.

After witnessing Jessica Jones save Malcolm Ducasse from muggers, Kilgrave became infatuated with her. He then took her to a Szechuan restaurant and began using his mind control powers on her. He forced her to spend time with him as he took her to five star hotels and expensive restaurants. Kilgrave also raped her repeatedly, using his powers to make her have sex with him. Wishing to test if Jones wanted to stay with him, he gave her no orders for twelve hours. When she disobeyed him, he ordered her to cut off her own ear, but he ordered her to stop after seeing that she was obeying. Instead, Jones had only scarred herself behind her ear.

When Kilgrave discovered that Reva Connors was in possession of a memory stick which featured footage of him being experimented on as a child, he forced her to reveal its location. He had Jones dig it up and then ordered her to deal with Reva. Horrified at what she had done, Jessica was free from Kilgrave's control. Running away, she disobeyed Kilgrave who ordered her to come back to him. At the same time, he was hit and nearly killed by a bus, whose driver was intoxicated at the time. He forced a man to donate his own kidneys to him to save his life and forced a doctor to perform the surgery. After the surgery, Kilgrave had faked his death and went into hiding. 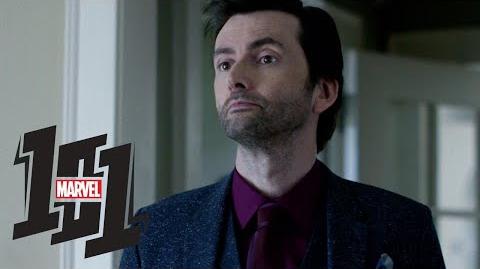 Kilgrave -- Marvel 101
Add a photo to this gallery
Retrieved from "https://marvel-movies.fandom.com/wiki/Kevin_Thompson?oldid=263823"
Community content is available under CC-BY-SA unless otherwise noted.