Kick-Ass 2 is the sequel to Kick-Ass where Dave Lizewski/Kick-Ass joins with a group of normal citizens who have been inspired to fight crime in costume and Chris D'Amico/Red Mist plots an revenge on Kick-Ass.

Dave Lizewski has retired from fighting crime, but inspired other ordinary citizens to become super heroes. He asks Mindy Macready to train him so he can become a proper hero. His girlfriend Katie Deauxma notices his odd behavior and frequent absence and thinks he is cheating on her with Mindy, (even though she is cheating on him), and breaks up with him. Mindy is caught crime fighting by her guardian Marcus, and promises to try to live an ordinary life. Not wanting to work alone, Kick-Ass joins a team of heroes called "Justice Forever". The team, led by Colonel Stars and Stripes, includes Dave's friend Marty as Battle Guy, Dr Gravity, Insect Man, the parents of an assassinated kid named Tommy and Night-Bitch. Chris D'Amico, upset at his mother's apathy towards his father's death, accidentally kills her with a tanning bed. Chris uses his inheritance to become a super villain, calling himself "The Motherfucker". Justice Forever serves the community, at first by helping poor people and patrolling the streets, then taking on the larger task of shutting down an illegal brothel. After patrols, Night-Bitch and Kick-Ass begin a sexual relationship. Dave and Marty try to get Todd involved but Todd gets upset when Dave and Marty mock his costume and name (Ass Kicker). Mindy tries to lead a normal life, and Marcus arranges for her to go to a slumber party with the popular girls in her class, led by Brooke. Brooke suggests Mindy try out for the dance team at school, but when Mindy wows the audience with her audition Brooke is not pleased. Dave tries to get Mindy back to crime-fighting, prompting her to ask a boy to take her out on a date. When Mindy eventually allows the boy to take her out, it all turns out to be a cruel prank, and Brooke and her friends abandon Mindy in the forest to walk home alone. Mindy goes to Dave for sympathy and he encourages her to beat the mean girls at their own game. The next day Mindy takes on the girls, first with verbal put-downs, then using a crowd control shock baton to induce sickness. Mindy is suspended from school and Marcus is disappointed. The Motherfucker uses his wealth to assemble a gang of supervillains, and establishes a lair, complete with shark tank. He tracks down Colonel Stars and Stripes and has his gang murder and decapitate him, publishing taunts and threats on Twitter saying that this is only the beginning. He continues his quest to destroy anything Kick-Ass loves, tracking down Night-Bitch and attempting to rape her. When the police are called to the scene, Mother Russia, a massive Russian ex-con, kills several police officers. This results in a police clamp down on all costumed villains and vigilantes, and the police arrest anyone dressed as a superhero. When the police come to the Lizewski house, Dave's father takes responsibility for being Kick-Ass. Dave's friend Todd joins The Motherfucker's gang; The Motherfucker learns from him that the man arrested for being Kick-Ass is Dave's father. He has Mr. Lizewski killed in jail and sends a photograph to Dave. Dave vows to never put on the Kick-Ass costume again. The other members of Justice Forever attend the funeral in sympathy with Dave, but the funeral is ambushed by the Motherfucker's gang and Dave is kidnapped. Mindy pursues the van, killing all its occupants and rescuing Dave. Mindy convinces Dave to become Kick-Ass again and confront the Motherfucker. They assemble their superhero friends and go to the Motherfucker's lair for a final confrontation. While Kick-Ass fights the Motherfucker, Hit-Girl struggles against Mother Russia. Mother Russia has nearly beaten Hit-Girl. She laughs at the syringe Hit-Girl is holding, believing it to be poison, and instead injects Hit-Girl with it. The "last resort" contains adrenaline, rejuvenating Hit-Girl so she can kill Mother Russia, stabbing her with shards of glass. Todd saves Marty from one of the Motherfucker's gang and the two make up. Fighting on the rooftop, the Motherfucker falls through a skylight, but Kick-Ass grabs his arm. The Motherfucker refuses help and falls, but lands in the shark tank. He survives the fall but is mauled by the shark. Mindy takes Dave home, and says she is leaving New York, to protect Marcus from police inquiry as she is wanted for murder. She tells him he is now the superhero the city needs and kisses him before departing. Dave accepts the responsibility and begins training and upgrading his equipment. In a post-credits scene, Chris screams from his hospital bed, his legs gone, and barely able to move.

The film was shot in London, England and parts in Canada. 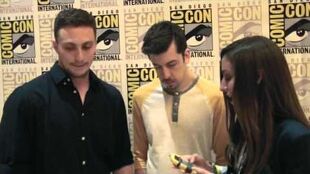 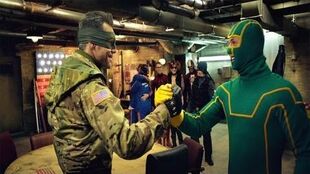 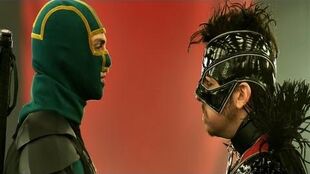 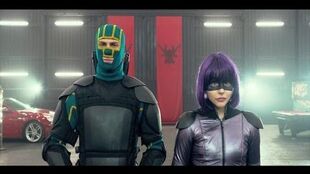 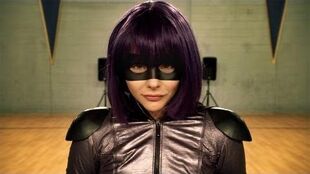 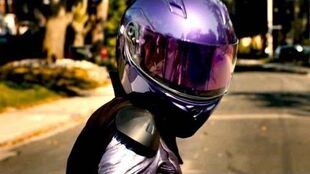 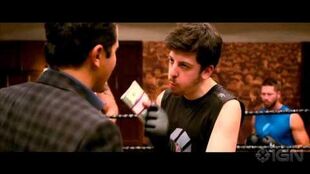 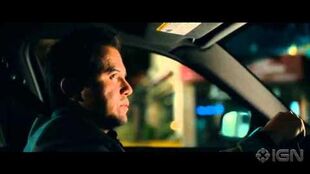 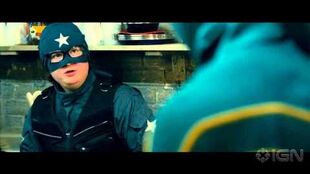 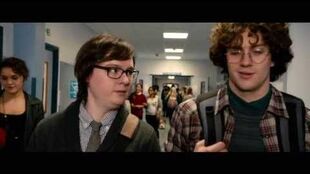 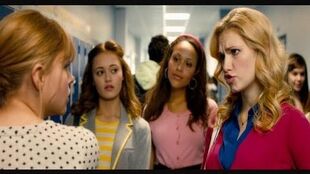 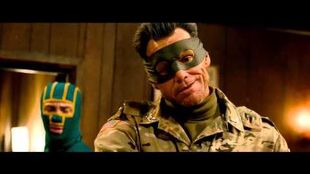 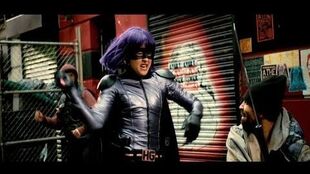 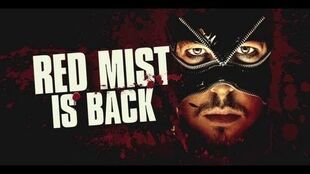 Red Mist Back for Vengeance 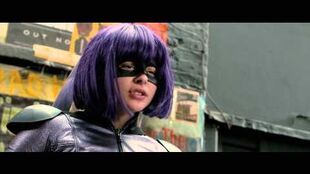 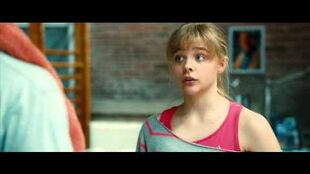 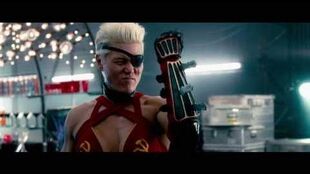 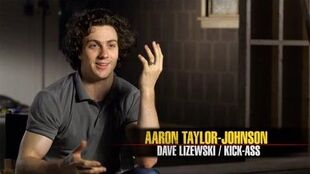 Donald Faison and Aaron Taylor-Johnson on set as Doctor Gravity and Kick-Ass. 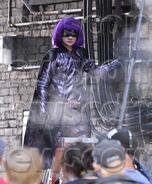 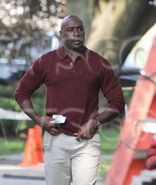 Lindy Booth on set as the Night Bitch.

Christopher Mintz-Plasse on set as The Mother F*cker

Clark Duke as Battle-Guy with Aaron Taylor-Johnson as Kick-Ass on set.

Jim Carrey on set as Colonel Stars and Stripes with Aaron Taylor-Johnson and Lindy Booth. 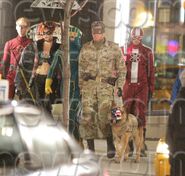 Big Daddy's costume on the set. 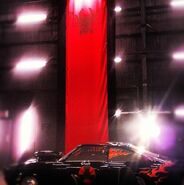 Kick-Ass 2 posters.
Add a photo to this gallery

Retrieved from "https://marvel-movies.fandom.com/wiki/Kick-Ass_2?oldid=262723"
Community content is available under CC-BY-SA unless otherwise noted.