Marvel Movies
Register
Don't have an account?
Sign In
Advertisement
in: Guardians of the Galaxy characters, Captain Marvel characters, Villains,
and 4 more

Guardians of the Galaxy
Captain Marvel

"How do you know about this?"
―Korath[src]

Korath the Pursuer was a Kree and a member of Starforce. At some point after Carol Danvers learnt the truth about the Skrulls, Korath left Starforce and got cybernetic enhancements, working solely for Ronan the Accuser.

Korath and his Starforce unit were called upon to complete a mission so boarded the Helion. Korath told his team how he had faced Skrulls before, specifically one that had disguised them self as Korath. Vers joked that it was so horrifying because he wasn't better looking. Bron-Char defended Korath, saying he was good looking. Yon-Rogg interrupted the banter and disclosed the mission: to respond to a distress signal from Kree scout Soh-Larr on the planet Torfa.

On Torfa, Korath, Yon-Rogg and Bron-Char approached the local inhabitants to try and find out what was going on but soon realised it was a Skrull ambush and had to fight back the hordes of Skrulls. Yon-Rogg told them to fall back to the Helion so they retreated but the Skrulls ambush was successful and they kidnapped Vers.

Korath piloted the Helion as they searched for Vers. When Ronan contacted them and blamed them for the failed mission, Korath almost revealed where they were headed but Yon-Rogg stopped him. Starforce finally reached planet C-53 and discovered Mar-Vell's Laboratory. They boarded the cruiser and took everyone on board prisoner. Carol broke free and fought the Kree, unleashing her full power. Although they put up a good fight, Starforce lost out to Carol and fled.

Korath used to train with Nebula and Gamora.

Korath was killed by Drax on the Dark Aster.

Korath, a powerful ally of the villainous Ronan, is a feared intergalactic hunter. Korath is a pursuer who is dedicated to the kill and focuses only on one thing - his target. 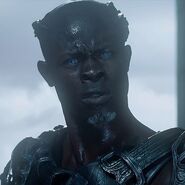