Marvel Movies
Register
Don't have an account?
Sign In
Advertisement
in: Guardians of the Galaxy culture, Agents of S.H.I.E.L.D. culture, Captain Marvel culture,
and 2 more

The corpse of the G.H. Kree was found by HYDRA and taken for study by the Strategic Scientific Reserve after Peggy Carter and the Howling Commandos siezed 0-8-4's from Austria.

Coulson and his team, along with John Garrett and Antoine Triplett find out where the facility is that is housing the GH.325 and the G.H.. Coulson found the floating corpse in the T.A.H.I.T.I. room and in shock at what he finds.

When asked by Agent Coulson about blue-skinned aliens that she had encountered, Sif mentioned the Kree as having had contact with the Asgardians.

The Kree were at war with the people of Xandar, as well as their associated planets, for thousands of years, until a peace treaty was finally organised with the Nova Corps. This, however, did not sit well with the fanatical Ronan, who vowed to uphold his people's values of conquering.

While the Kree Empire claimed not to approve of his actions, a Kree Ambassador refused to accept Nova Prime's request to condemn his actions either.

One of the doctors at the facility told Coulson that the alien corpse they've had was over "1,000 years old, pre-dating the pyramids".

In 1945, while being interrogated by Peggy Carter, Daniel Whitehall stated that the "Blue Angels" that fell from the sky were looking to conquer the Earth.

In the present, The Doctor corrected Whitehall when he was telling him the story, stating that "they said conquer?", and proceeded to tell him that they wanted to end man-kind, and save only a selected few who the Diviner deemed "worthy".

Raina mentioned that the ancient alien race are the Kree, and that the Diviner is their device.

At the hospital, Bobbi and Skye find Kava, who is now completely blue-skinned, using liquid nitrogen to change the color of his skin to that of a Caucasian human's. He attacks the two of them, but before Skye can fire a shot she starts generating tremors that rip apart her gun and allow Kava to get away.

The team regroups on the Bus. Now that they know the man is a Kree, Sif realizes "Kava" is not his name but is the Kree word for "Keys." They see he is headed towards a Portuguese city called "Chaves", the same place where Daniel Whitehall found the SSR, and they corner him while he is leaving a cave while dragging a large crate. S.H.I.E.L.D. takes the Kree into their custody and begin questioning him aboard the plane. He reveals his name is Vin-Tak and claims he is there to help. He also says he only took Sif's memory away from her so she would stop tracking him, and that he could restore it if he could have access to his truncheon.

Coulson gives him the opportunity to prove he is friendly once they get back to the Playground. However, Vin-Tak kicks his truncheon out of Coulson's hands and jabs Sif with it, but suddenly drops it and holds his hands up. Sif recovers with her memories in tact. She reveals Odin sent her to Earth when Heimdall saw a Kree arrived on Earth. Vin-Tak, however, says he came to Earth because he received an ancient signal indicating that someone on the planet had underwent Terrigenesis. He goes on to explain that a faction of his people came to Earth thousands of years ago to genetically modify early humans into becoming their weapons.

The modifications would be activated if they came into contact with Terrigen Crystals, which were stored inside the Diviners. However, the modified humans proved to be too powerful, so the other Kree came to Earth and shut the project down, but left behind a collection of Terrigen Crystals large enough to create an army.

The Kree are a humanoid race with a massive inter-planetary empire their skin varies from white, black and blue. They have been at war with Xandar for thousands of years and would have been a space-faring race even before that. They are seen to be technologically advanced and one of the prominent species of alien that interact in the space community seen in Guardians of the Galaxy. They have traveled to Earth millennia ago to proceed genetic experiments on humans, resulting in the Inhumans, while also leaving behind Diviners and the Monolith.

Ronan has exhibited superhuman strength, reflexes and combat skills, as well as being able to touch an Infinity Stone for a limited period of time, but it is unknown if this is a quality shared by all Kree or unique to Ronan. However, in Agents of S.H.I.E.L.D., a formula derived from a Kree corpse on Earth is used to aid cellular regeneration in humans with the side effect of the obsessive writing of an alien city. It can be inferred that accelerated healing is a trait exhibited by all Kree and that this Kree city on Earth is of extreme importance to at least the Kree that visited Earth. 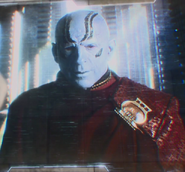