Kurt Wagner, also known as Nightcrawler, is a mutant who possesses the ability to teleport himself to wherever he wants as long as he knows where he is going.

Kurt was working in a Munich circus until he was captured and taken to a Mutant fight club. He tries to escape but the walls of the cage block his teleporting and he is forced to fight his opponent: Angel. Although initially he tries to dodge and avoid fighting, Angel tells him that if he doesn't fight they will both be shot, Kurt knocks Angel into the walls of the cage severely damaging his left wing. Mystique has found the fight club and shuts off the power to the fences allowing Angel and Nightcrawler to escape, Angel fights his way out but Kurt is taken by Mystique. Mystique takes him to Caliban in order to get a new identity to travel to safety. However, Mystique sees a news broadcast on Magneto and decides to go see Charles Xavier and she takes Kurt with her. At the school Kurt becomes friends with Jubilee who gives him a tour of the mansion, he also meets Scott Summers and Jean Grey. He tells Scott how he is unfamiliar with what a mall is, so Scott decides the four teen mutants should skip school and go out and have fun.

At the mall, Kurt gets to experience normal teen activities, he shops for records, sees "Return of the Jedi" and experiences "brain freeze" from a frozen drink at the food court. Scott then drives the four friends back to the mansion, only to find it has been attacked by Apocalypse and the Horsemen and Professor X has been taken. William Stryker also arrives and kidnaps Mystique, Quicksilver, Moira MacTaggert and Beast. Kurt hides in the rubble of X Mansion with Scott and Jean, who manages to use her telepathy to keep them cloaked from Strykers soldiers. The trio sneaks on the jet with the captured X-Men, to Alkali Lake Stryker's base for experimenting on mutants, to rescue their friends. At Alkali lake the trio is forced to hide from guards and encounter Wolverine locked in a cage, Jean sets him free and he goes on a killing rampage throughout the base.

While teleporting in various locations inside, Kurt eventually finds the captured heroes and Scott uses his powers to blast open their cell. Kurt, Scott, Jean, Mystique, Quicksilver, Beast and Moira don armored suits and board a jet to fly to Cairo to save Professor X. The team is divided with Kurt tasked to retrieve Charles's body from Apocalypse before they transfer consciousness's, but he is attacked by Angel again. Nightcrawler defeats Angel again by teleporting him inside some rubble and retrieves Charles, the X-Men return to the jet and are preparing to escape but the Horsemen attack and Kurt is forced to teleport himself and seven others to safety, straining him and causing him to pass out. When he awakes, his fellow X-Men have defeated Apocalypse once and for all.

The mansion is rebuilt and Kurt stays on as a student permanently, also joining Mystique, Beast, Quicksilver, Cyclops, Jean and a reformed Storm as the new X-Men. Under the watch of Professor X. the team gathers in the Danger Room to train against an army of Sentinels.

Nearly ten years have passed since the X-Men’s defeat of Apocalypse and with their victory over the all powerful mutant has come fame and public acceptance. In 1992 when the crew of space shuttle Endeavor were in danger of being killed by a powerful solar flare the X-Men where sent into space by Xavier to rescue them much to Kurt’s shock and excitement. Making their way near the shuttle Raven asked Kurt if he could teleport inside and get the astronauts out but Kurt claimed that it was moving too fast and that he could not see inside to teleport inside. Cyclops proceed to blasted a whole in the shuttle slowing it down and allowing Kurt to teleport himself and Peter inside. Quicksilver then proceeded to use his super speed to quickly get the astronauts out of their seats and to Kurt who teleported everybody back to the X-Jet.

However one of the crew revealed that their captain was still inside the shuttle. Unwilling to leave anyone behind despite Ravens protest Charles had Kurt take Jean back to the Shuttle so she could hold it together and protect them long enough to get the captain to safety. However as Kurt retrieved the captain the solar flare struck forcing Kurt to teleport himself and the captain back to the X-Jet and leaving Jean behind. As Scott worriedly shouted at Kurt for Jeans whereabouts Kurt could only apologize as the flare struck the shuttle and Jean. Miraculously and unexpectedly Jean survived being hit by the flare and Kurt teleported her back to the X-Jet.

Returning to the X-Mansion Kurt and the team received praise from the students and Xavier. Later at night at a party featuring the mutant singer Dazzler. Jean (having become infused with the power of the cosmic entity known as the Phoenix) suffered a mental breakdown that resulted in her powers knocking several people back and resulting in her becoming unconscious.

When Jean escaped the X-Men pursued her to her home town of Red Hook, New York where it was discovered her once thought deceased father had lived. A fight soon broke out between the X-Men and Jean. Kurt attempted to subdue Jean, grappling with her while teleporting. However Jean managed to restrain him with her powers and proceeded to drop debris on him. When Raven attempted to talk Jean down the latter lost control of her powers and accidentally sent Raven flying into a piece of wood from one of the destroyed houses killing her.

Returning to the X-Mansion a funeral service was held for Raven as Kurt and the others mourned the death of the beloved field leader and idol. When Charles discovered that Hank enraged by Xavier lies and deceit and wanting revenge for Ravens death had teamed up with Erik to kill Jean, Charles having found out through Cerebro ;Jeans location in New York City had Kurt teleport him Scott, and Ororo to their location. There they found Hank and Erik supported by Erik’s Brotherhood of Mutants. A fight broke out in which Kurt struggled to teleport Xavier inside the building Jean was in. Eve tuna lily he succeeded and the two teleported inside only to be confronted by a now almost completely corrupted Jean thanks to the manipulations of the alien D'Bari known as Vuk. Jean managed to easily do away with Kurt and proceeded to nearly kill Xavier until Xavier managed to get her back to her senses. Around this time the Mutant Control Unit arrived and took everyone into custody outfitting them with Mutant Inhibitor Collars.

On the train to a containment facility the train was attacked by Vuk and her D'Bari determined to acquire the power of the Phoenix from Jean and use it to destroy Earth and inhabit it with their people. The X-Men and Brotherhood of Mutants proceeded to unite. During the battle a solider who had mentioned his son was a fan of Nighcrawler was killed by one of the D'Bari. Angered Kurt proceeded to slaughter numerous D'BarI and teleporting the one responsible for the soldiers death in front of the train killing them. Eventually Jean having fully mastered control of the Phoenix awoken and sent the train off the rails but using her powers to protect all of them. She then proceed to kill al the remaking D'Bari including Vuk before leaving into space. Choosing to roam the stars for the time being.

In the revised timeline, Nightcrawler is now proud of his mutation to the point of announcing to Beast that he is blue in response to Beast's surprise at Mystique not in her blue form. He is still religious and dislikes fighting unless he is forced to do so, in order to defend himself. When sufficiently angered Kurt has shown the ability to be incredibly brutal such as when he killed numerous members of the D’Bari for their role in killing a human security guard. 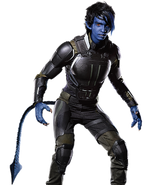 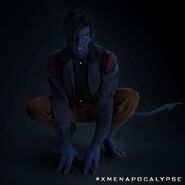 Retrieved from "https://marvel-movies.fandom.com/wiki/Kurt_Wagner?oldid=276816"
Community content is available under CC-BY-SA unless otherwise noted.