60 Minutes
Loki is a Disney+ series that is part of the Marvel Cinematic Universe and follows the God of Mischief of the alternate timeline created after he escaped from S.H.I.E.L.D. and the Avengers with the Tesseract in Avengers: Endgame. It serves as a tie-in to the upcoming Doctor Strange in the Multiverse of Madness.

"Picking up immediately after Loki steals the Tesseract (again), he finds himself called before the Time Variance Authority, a bureaucratic organization that exists outside of time and space, forced to answer for his crimes against the timeline and given a choice: face deletion from reality or assist in catching an even greater threat." 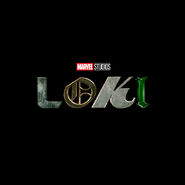 Tom Hiddleston Looks Back at 10 Years of Loki - Entertainment Weekly

New Trailers from Marvel Studios! - Marvel Minute
Add a photo to this gallery

Retrieved from "https://marvel-movies.fandom.com/wiki/Loki_(Disney%2B_series)?oldid=291476"
Community content is available under CC-BY-SA unless otherwise noted.