"We lie and we cheat, we cut the throat of every person who trusts us, and for what? Power. Glorious power. Glorious purpose! We cannot change. We're broken, every version of us. Forever."
―Classic Loki[src]

Loki Laufeyson was a variant of Loki that was pruned by the Time Variance Authority. He was from many years into a future where Loki faked his death at Thanos' hands instead of actually being killed by him.

In his timeline, when Thanos attacked after Ragnarök, Classic Loki did not attempt to stab the Mad Titan with a blade as Loki Laufeyson did. Instead, Classic Loki used a realistic projection of himself to fake his own death, one that was so successful that even Thanos believed him to be dead and then he hid as inanimate debris. Classic Loki then simply drifted in space, away from his brother and everything else and considered the universe and his place in it. Classic Loki realized that everywhere he went, pain followed so he isolated himself on a remote planet in solitude for a very long time.

Eventually, Classic Loki got lonely and started to miss his brother and to wonder if Thor and anyone else missed him too. However, when Classic Loki made his first steps to getting off of the planet, the Time Variance Authority arrived and banished him to the Void at the end of Time. Classic Loki subsequently formed an alliance with Kid Loki, Alligator Loki and Boastful Loki to survive.

After the Time Heist Loki got pruned, Classic Loki appeared alongside Alligator Loki, Boastful Loki and Kid Loki to ask him to join them.

"Damn it! Animals, animals. We lie and we cheat, we cut the throat of every person who trusts us, and for what? Power. Glorious power. Glorious purpose! We cannot change. We're broken, every version of us. Forever."
―A dejected Classic Loki[src]

Classic Loki shared the same character traits with Loki Laufeyson up until Loki's death when Classic Loki changed things by using a realistic projection of himself to fool the Mad Titan. However, while drifting through space and considering his place in the universe, Classic Loki came to the conclusion that everywhere he went, only pain followed. This led to Classic Loki isolating himself for a very long time until he got lonely and started missing Thor and wondering if Thor and anybody else missed him too.

However, when Classic Loki attempted to return to the universe, the Time Variance Authority pruned him. As a result, Classic Loki became dejected and bitter, believing that all variations of Loki only exist to serve one purpose in the universe: the God of Outcasts. Classic Loki developed a negative view of himself and all Loki's, believing that they were all broken and couldn't change and he displayed disgust for the desire for power Loki's held and to what lengths they would go in order to get it.

"Take no offense my friends, but blades are worthless in the face of a Loki sorcery. They stunt our magical potential."
―Classic Loki[src]

As a variant of Loki, Classic Loki had all of the same powers as him. However, his magical abilities were stronger than his combat abilities as he had focused mainly on training his magic over the many years following his faked death at Thanos' hands. After seeing what Classic Loki was capable of, the Time Heist Loki stated that he believed that he and Sylvie were capable of more than they realized. 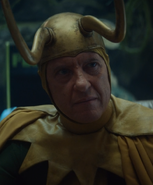