"I betrayed everyone who ever loved me. I betrayed my father, my brother, my home. I know what I did. And I know why I did it. And that's not who I am anymore."
―Loki[src]

Loki Laufeyson was an Asgardian prince, the God of Mischief. A Frost Giant born smaller than the rest of his species, he was the adopted brother of Thor Odinson. He shared his history with his counterpart up until 2012 where, after being taken into S.H.I.E.L.D. custody following the Battle of New York, he got hold of the Tesseract and teleported away from captivity. He was subsequently captured and recruited by the Time Variance Authority.

When Iron Man, Captain America, Hulk, and Ant-Man traveled back to 2012 to retrieve the Chitauri Scepter, the Time Stone, and the Tesseract containing the Space Stone, they arrived before Loki was apprehended following the Battle of New York. Hulk went to get the Time Stone from the Ancient One and the others headed to Stark Tower, where they witnessed Loki asking for a drink after his defeat.

Loki was escorted to the lobby where Alexander Pierce tried to take custody of him and the Tesseract, leading to an argument between Pierce, Thor and Tony Stark. A mishap with the Hulk knocked the case holding the Tesseract out of 2023 Tony's hand and it burst open. The Tesseract landed at Loki's feet and he picked it up, teleporting away from Stark Tower. 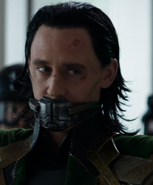