Maria Collins Carbonell Stark was the mother of Tony Stark and wife of Howard Stark.

Maria was present with her husband as he and Anton Vanko discussed about the Arc Reactor technology.

She is called by her husband, Howard, when Tony, at a young age, messes with Howards layout of a New York city.

Maria and Howard Stark were mentioned in the same news clipping as the one seen in Iron Man when Arnim Zola was explaining that HYDRA killed them to Steve Rogers and Natasha Romanoff. 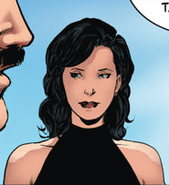 Add a photo to this gallery
Retrieved from "https://marvel-movies.fandom.com/wiki/Maria_Collins_Carbonell?oldid=267061"
Community content is available under CC-BY-SA unless otherwise noted.