"You have a gift. You have power. And with great power, there must also come great responsibility."
―May Parker[src]

May Parker was the aunt and legal guardian of Peter Parker. She was married to Peter's biological uncle Ben Parker before his demise.

May was among the many who vanished when Thanos completed the Infinity Gauntlet and wiped out half the life in the universe. Five years later, she was resurrected by Bruce Banner via the Nano Gauntlet.

During the Multiversal Crisis, May was mortally wounded by Green Goblin's Goblin Glider. Before succumbing to her injuries, she told Peter that "you have a gift, and with great power there must also come great responsibility", inspiring him to continue his work as Spider-Man; despite the recent hardships and suffering that Peter had gone through.

May waited for her nephew Peter to come home as Tony Stark paid them a visit wanting to offer Peter an "internship". May was very excited by the opportunity.

Later, May tended Peter's bruises asking her nephew how he came to get them. Peter told her he got into a fight with a guy from Brooklyn named Steve and his friend who was huge.

May let Peter's best friend Ned Leeds wait in Peter's room to build the LEGO Death Star. Later, when Peter came home, May heard a crash from Peter's room as Ned dropped the LEGO so went to see what the noise was. Seeing that Peter was home, May suggested they go out for Thai food. Peter declined on Ned's behalf. In the restaurant, May noticed that Peter wasn't eating much and she warned her nephew to run for safety if he ever came across any crimes like the Queens Community Bank robbery. The waiter gave them a free dish on the house because he found May attractive although May played coy.

A few nights later, May gave Peter and Ned a lift to Liz Toomes' house party. She comforted Peter because she could see he was nervous, although she wasn't aware of the real reason why. She told them both to have fun and then drove away.

When she was informed by Peter's school that he tried to skip class, May confronted her nephew. She told him that she knew all about him sneaking out at night and wanted to help. Peter told her that he had lost the Stark internship and May comforted him.

After Peter successfully invited Liz to the homecoming dance, Peter asked May for her help. She showed him how to dance, gave him a suit and corsage to give to Liz and taught him how to tie a Windsor knot in his tie. She then dropped him at Liz's house.

A few days after the homecoming dance, Peter didn't realize May was home and put on the Spider-Man suit. May walked in and was shocked to see her nephew suited up.

May worked with F.E.A.S.T., advertising their connection to Spider-Man after Peter's true identity was revealed. Desperate for help after getting transported into an alternate universe, Norman Osborn sought out May's help, befriending her. After hearing Norman's story and about the other villains who were destined to die at Spider-Man's hands upon their return to their own universes, May convinced a reluctant Peter to cure them in the hopes of changing their fates.

May later helped transport everyone to Happy Hogan's condo and she was surprised when Peter revealed a Stark Industries Fabricator, something that May had thought was a broken tanning bed. May awkwardly tried to cater the villains, offering Otto Octavius water with salt since he was an octopus. Peter succeeded in curing Octavius who joined him and Norman in creating the cures. However, the Green Goblin took over Norman's body and he convinced the others to turn on Peter.

As battle raged between Peter and the Goblin, May grabbed the finished cures and fled through the building. As the Goblin attempted to choke Peter to death in the lobby, May injected him with the cure that Norman had come up with for the Goblin Formula, but it failed to work. Seeing May as the source of Peter's "weakness", the Goblin attacked her with the Goblin Glider's blades before destroying the lobby with one of his Pumpkin Bombs.

In the aftermath, May reassured Peter that he had done the right thing even with how badly it had turned out as the villains would've been killed otherwise. Although Peter didn't believe it, May told him that he had a gift and power and that "with great power, must also come great responsibility." As the two began making their way out of the wreckage, May suddenly collapsed, and she and Peter discovered that May had been mortally wounded by the Goblin's attack. As Peter comforted her, May died moments later. With the authorities closing in a heartbroken Peter was forced to flee, leaving May's body behind.

May's death left Peter vengeful, but two other Peter Parker's convinced Peter to change his mind using their own experiences with loss. Peter recalled May's words about "with great power, must also come great responsibility" which the other Peter's had also been told by their respective uncle Ben's before their deaths. As a result, Peter continued and completed the mission that May had set him on to cure the villains. Although Peter tried to kill the Goblin in revenge, Peter-Two stopped him. Although the Goblin taunted him that May's death was Peter's fault, Peter chose to inject him with the cure, destroying the Goblin and restoring a horrified Norman.

A few weeks later, Peter visited May's grave where he met Happy Hogan who didn't remember Peter; due to Doctor Strange's spell. Happy discussed his pain over the loss of May with Peter, comparing it to the pain he felt over the loss of Tony Stark. Happy wondered if because they were gone, what they stood for was gone too, but Peter promised him that it wasn't because everyone that May helped would keep it going. Peter's encounter with Happy inspired him to continue his work as Spider-Man even though no one knew who he was anymore. 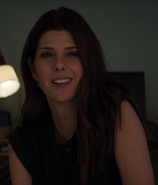 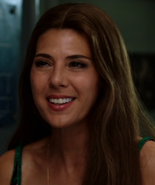