Men in Black 3 is a 2012 science fiction comedy film based on the Aircel comic of the same name. The film acts as a sequel to the 1997 film Men in Black and its sequel, the 2002 film Men in Black II which has MIB agent J traveling back in time to the 60's and save K from an alien criminal named Boris the Animal.

The intergalactic criminal Boris the Animal is aided in escape by his girlfriend, Lily Poison, from the LunarMax prison on Earth's moon. He is intent on going back in time and killing Agent K, who on July 16, 1969, shot off one of his arms and captured him. After investigating a spaceship crash in New York City, and following a skirmish in a Chinese restaurant, Boris appears, and K and J give chase. Boris reveals to K, "you are already dead, you just don't know it yet," and then disappears in an explosion. K deduces that Boris has escaped, and K regrets not having killed him. He returns to his apartment, where all traces of him disappear. Agent J, however, still remembers K, though no one else at Men in Black headquarters does.

Agent O, the new Chief deduces from J's statements that a fracture has occurred in the space-time continuum. The two realize Boris must have time-jumped to 1969 and killed K, resulting in an imminent invasion of Earth by his race, the Boglodites, due to the absence of the protective ArcNet shield around Earth, installed by K in 1969. Aided by electronic-shop owner Jeffrey Price, son of Boris' fellow prisoner Obadiah Price, who created the time-travel device, J time-jumps off the Chrysler Building to reach time-travel velocity. With only 24 hours to stop Boris, J arrives a day before Boris kills K.

J follows a clue to Coney Island, where 29-year-old agent K arrests him and then questions him at MIB headquarters, while a young Agent O happens by. Getting no answers, K places J in a large, primitive Neuralyzer . At the last second, J says he'll tell the truth of his mission. As a team, they follow Boris' trail to a bowling alley and then to The Factory, the studio / party space of Andy Warhol's, who is actually the undercover Agent W. The Agents meet the alien Griffin, an Arcadian who possesses the ArcNet and is able to see all possible futures. Griffin leaves before Boris arrives to snatch him. The Agents locate Griffin at Stadium Shea, where he gives them the ArcNet and instructs them to place it onto the Apollo 11 lunar rocket launch occurring in less than six hours. Boris then snatches Griffin, but the agents, on monocycles, give chase and recover Griffin.

Upon arriving at Cape Canaveral, the agents and Griffin are arrested by United States military police. A Colonel, however, allows the agents to carry on their mission after Griffin uses his precognitive power to show him what J will accomplish. J uses the time-jump device to confuse Boris, and pushes him off the pad to his death. K, battling the younger Boris, ruptures a hose, causing it to spray liquid nitrogen on Boris' left arm, shattering it. K plants the ArcNet on the rocket, and the protective shield deploys after reaching Earth's atmosphere. The Colonel congratulates K, who invites him to join the agency.

As J watches from the distance, however, 1969 Boris emerges from the blast chamber and kills the Colonel, only to be killed by K. A child named James exits a military vehicle looking for his father. He pulls out a pocket watch, revealed earlier to have been passed down to Agent J by his father, and J realizes that the colonel killed by Boris was actually his father. K neuralyzes young James, telling him his father was a hero.

J returns to the present day, where he meets his partner at the usual diner. There, he shows K his father's pocket watch. The senior agent, in return, tells him it was an honor to have met him that fateful day. As they leave the diner, Griffin, a few seats away, muses all is well with the world, except for the fact that K forgot to leave a tip, indicating they are in a timeline where the Earth is about to be hit by an asteroid. Then, K returns to the diner and leaves a tip, revealing this timeline to be one where the asteroid disintegrates when hitting a satellite, and the film ends.

The film was shot in New York and California. 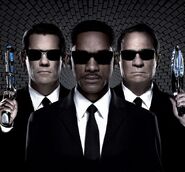 Will Smith as Agent J and Josh Brolin as 60's Agent K.

J and K on alien motorcycle.

J and K neuralyzing a woman.

Young K and J.
Add a photo to this gallery

Retrieved from "https://marvel-movies.fandom.com/wiki/Men_in_Black_III?oldid=262750"
Community content is available under CC-BY-SA unless otherwise noted.