Marvel Movies
Register
Don't have an account?
Sign In
Advertisement
in: Avengers culture, Captain America culture, Guardians of the Galaxy culture,
and 2 more

The Mind Stone was originally housed in the Chitauri Scepter given to Loki to aid in his invasion of Earth. Placed within the sceptre, the stone granted its wielder the power to enslave others' minds. When Loki was defeated by the Avengers, the sceptre was taken into the custody of S.H.I.E.L.D.

Sleeper HYDRA agents smuggled the sceptre into Sokovia, where Wolfgang von Strucker began using it to experiment with human enhancement. However, only two subjects survived the process, Pietro, and Wanda Maximoff.

After capturing the sceptre from Strucker in a raid with his fellow Avengers, Tony Stark analyzed it and determined that it contained an advanced AI, which could be used to bring about his vision of a global peacekeeping program called Ultron. However, Ultron was an immediate failure, and the AI stole the sceptre away again. Thor subjected himself to a vision which clarified that the sceptre contained the Mind Stone, one of six Infinity Stones. Ultron used the Mind Stone to empower a perfect organic metal body for himself. In capturing the android body, the Avengers reacquired the Mind Stone, and after it came to life with benevolent programming it proved to them that it was an ally rather than a threat. The android, then calling himself the Vision, aided the Avengers in defeating Ultron. Thor subsequently opted to leave the Mind Stone in the Vision's care, both because the Vision had demonstrated his good character by lifting Mjölnir, and also because the stone seemed safe in the Vision's care.

Vision tells Wanda, when Steve, Bucky, and Sam were locked away for a short while, that he has no idea what the stone is. He said that it controlled him, but he felt that the more he used it, the less it does, and that maybe someday, he could control it himself.

During the Battle of the Airport, Vision arrives late, despite him being thrown hundreds of floors down by Wanda, and helps to try to defeat Steve and his team, by blocking their path to the Quinjet that was in one of the bays by using the Mind Stone to send a laser beam that tears up the ground in front of the Avengers. Later, Vision uses the stone to cut the watchtower that was next to the quinjet to try to stop Steve and Bucky from accessing it. They slid under it to safety, and Vision failed again. A bit before, Vision flies down to the ground, to help Wanada despite she is opposing him. Tony tells Vision to use the stone to take out Sam's thrusters. When he does, Sam looks back, and tucks the wings in, turns himself into a ball, and waits until the beam passes him to extend his wings again. The beam ended up destroying Warmachine's powersource, sending him plummeting to the ground, where Tony would come down to try and help his friend.

After the battle, Tony asked Vision what happened, and he says that he lost focus, even though they both thought that that wasn't possible.

In Scotland, Proxima Midnight and Corvus Glaive ambush Wanda Maximoff and Vision. Steve Rogers, Natasha Romanoff and Sam Wilson rescue them, and take shelter with James Rhodes at the new Avengers facility. Vision offers to sacrifice himself by having Maximoff destroy the Mind Stone in his forehead to keep Thanos from retrieving it. Rogers suggests they travel to Wakanda, which he believes has the resources to remove the stone without destroying Vision. Eventually after collecting all other Infinity Stones, Thanos arrives on earth and retrieves the Mind Stone, destroying Vision.

Three weeks after the Decimation, the surviving Avengers finally located Thanos and tried to reclaim the Infinity Stones to reverse what he had done. However, Thanos had used the power of the Stones themselves to destroy them all.

Five years later, the Avengers used the Quantum Tunnel to return to 2012 where Captain America intercepted the Mind Stone and gave it to Scott Lang who returned with it to 2023.

When the Mind Stone was inside the Chitauri Scepter, the stone could control another person mind. The user places the blade tip against the person’s heart and the Mind Stone produces a blue, like energy which is transferred into the person’s body where it then spreads up to their head, notably affecting their eyes, turning them a fluorescent blue color. People put under the scepter's control will often regain their individuality after receiving a significant blow to the head, as a temporary loss of consciousness will allow their normal mental state to "reset" and return. In some situations, the effects of the mind control can be canceled out if the energy from the scepter is unable to diffuse into the target's body, such as when Tony Stark's Arc Reactor block the energy instead.

While the stone was in HYDRA's possession, Wolfgang von Strucker commented that the scientists studying it had only just scratched the surface, implying that the stone's capabilities are more diverse than originally perceived, two more powers were seen, as it could grant sentience to Ultron with the codes it possessed and Vision when placed in his forehead, as well as granting powers to humans like Wanda and Pietro Maximoff. 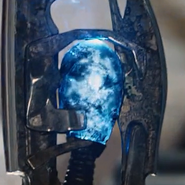 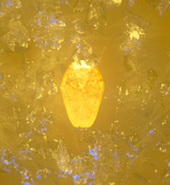 The Aether, TheTesseract and the Mind Stone (briefly seen, right).