107 mintues
Morbius is the third instalment in Sony's Spider-Man Universe after Venom: Let There Be Carnage and based on the Marvel Comics character, Michael Morbius, a doctor with a rare blood disorder turns into a living vampire.

At a private hospital in Greece, a 10-year-old Michael Morbius welcomes the arrival of his surrogate brother Lucien, who he decides to name "Milo" instead. Both suffering from a rare blood disease preventing their bodies from creating blood, after Michael manages to save Milo's life by fixing his broken blood pump, their father Nicholas arranges for him to study at a special school for geniuses in America while continuing to care for Milo himself.

Twenty-five years later, the now 35-year-old Dr. Michael Morbius refuses a Nobel Prize from the King and Queen of Sweden for having developed synthetic blood that has saved millions of lives, due to it failing as long-term treatment for his specific disease. Returning to his lab, Morbius' colleague and girlfriend Martine Bancroft derides him for illegal experiments he is conducting with piranhaiac vampire bats he had illegally stolen from the Amazon Rainforest, attempting to extract their transgenic vampirism and turn himself into a vampire, effectively curing his disease. After informing Nicholas and Milo (now a billionaire) of his newest experiment, Morbius gets funding to continue his experiments on a cargo ship in international waters, and develops a working cure, managing to turn both a mouse and then himself into a vampire. However, after Morbius breaks free of his bonds and climbs to the ceiling, Martine absentmindedly opens his containment field, causing Morbius to escape and massacre the entire crew, draining them of their blood; during the conflict, Martine is rendered comatose after tripping and hitting her head on the ground. Coming to his senses once his bloodlust has subsided, a horrified Morbius erases all CCTV footage of his experiments before calling in a distress call to the mainland and jumping overboard.

Returning to New York City, Morbius continues his experiments, subsiding on his synthetic blood until it begins to grow less potent, finding his original set of vampire bats view him as a bat, and that he now has superhuman "Olympian" strength and echolocation abilities. Elsewhere, FBI agents Simon Stroud and Al Rodriguez investigate Morbius' victims. After Milo arrives at his lab looking for Martine, unaware of her coma, he is surprised to see Morbius cured of his disease and seeking blood, but is outraged when Morbius refuses to give him the cure. Later, while checking in on the comatose Martine at their hospital, Morbius finds a nurse has been drained of her blood and killed. Believing himself responsible, he attempts to escape the hospital before allowing Stroud and Rodriguez (who had deduced his involvement in the vampire killings from a signed origami bat he had left on the boat) to arrest him when confronted. In prison, Morbius is met by Milo posing as his lawyer, who promises to use his connections to have him freed. After Milo leaves without his cane, Morbius realises he had taken the cure and most likely killed the nurse, and escapes from prison to confront him, hearing him kill a man who mocked Morbius for his original disability. Admitting he killed the nurse, but only due to the same bloodlust that caused Morbius to kill the ship's crew, Milo asks Morbius to join him in embracing their truer selves and live as vampires, before killing a group of police officers attempting to arrest Morbius and leaving.

The next day, Morbius meets with Martine, telling her of Milo's involvement, and asking her to stay away from him. Morbius acquires a new lab from some counterfeiters to work from, developing a compound to commit suicide, but finds himself reluctant to. Elsewhere, Stroud and Rodriguez finds footage of one of Milo's attacks. Recognizing him as someone other than Morbius, and his vampirism to be spreading, they release it to the media. Although virtually unrecognisable, Milo is recognised by Nicholas, who goes to his apartment and pleads with him to stop. Deriding him for always treating Morbius as "daddy's favourite", Milo mortally wounds Nicholas and tells him to call Morbius. As Morbius responds to Nicholas' phone call and goes to his side, seeing him die, Milo makes his way to Martine and mortally wounds her. Hearing her final moments, Morbius makes his way across the city and holds her in his arms as she dies, before feeding on her blood. Confronting Milo, Morbius tackles him into the sewers, before summoning an army of thousands of bats from the sewers and setting them upon Milo, keeping him motionless long enough for Morbius to use his compound on him, ending his bloodlust. Tearfully accepting of Morbius for having given him his name, Milo dies in his arms. Mourning Milo and Martine, Morbius takes flight with the vampire bat swarm in full sight of the city, embracing his identity as a vampire. Elsewhere, Martine is brought back to life by her newly developed vampire powers and physiology.

Elsewhere, Adrian Toomes finds himself transported to Morbius' universe by a magic spell. Sometime later, knowing the reason was "something to do with Spider-Man", he contacts Morbius himself, seeking to form a team of people like them to "do some good", which Morbius finds "intriguing".

Continuity and References to the Sony's Spider-Man Universe

The line between hero and villain will be broken.

The film was shot in the U.K. 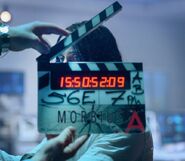 MORBIUS Vignette - Who Is Morbius?

MORBIUS Vignette - The Lore of Morbius