"I lived my entire life waiting for this moment. I trained, I lied, I killed just to get here, I killed in America, Afghanistan, Iraq. I took life from my own brothers and sisters right here on this continent! And all this death, just so I could kill you."
―Erik Killmonger[src]

N'Jadaka was the son of prince N'Jobu and an American woman. His legal, American name was Erik Stevens. After his uncle T'Chaka killed N'Jobu, Erik sought revenge on his cousin, T'Challa. He also goes by the name Killmonger as a former Black-Ops soldier.

As a child, N'Jadaka had a happy life up until his father, N'Jobu, was killed by his uncle, T'Chaka, in a dishonorable manner.

As an adult, N'Jadaka was an angry, violent, vengeful, cruel, unstable and ruthless individual. This was due to witnessing and learning about oppression towards people of African and African-American descent, and growing up without his father or mother, who died in prison for a crime that she never committed.

Due to his training as a navy seal and black ops mercenary, killing became second nature to him earning his nickname "Killmonger". He felt little to no guilt, shame or remorse for killing his enemies and allies alike. Although his savagery made him a great combatant, Erik would have eventually destroyed Wakanda; as his anger and hatred had consumed.

Although N'Jadaka was proud of his Wakandan heritage, proudly stating his birth name to the Wakandan elders, ironically, he cared little about their traditions as evidenced by his remorseless burning of the City of the Dead so there would be no new Black Panther and was willing to break years of isolationism just so to wage wars by sending Vibranium across the world.

Despite his violent and unstable traits, Killmonger was an honorable combatant, in all of his confrontations against T'Challa, he never once resorted to dirty tactics to defeat his cousin; proving that he had a personal sense of honor.

Despite his faults, N'Jadaka's main goal was to end oppression for people of African and African-American descent who he saw as his own people. His actions had a deep impact on T'Challa, helping him realise that his father's strict adherence to Wakanda's isolationist traditions had led to the birth of a monster like N'Jadaka. Instead of protecting their country from them, T'Challa chose to reveal Wakanda's true nature to the world, to help others as a king instead of to conquer them like N'Jadaka would have. T'Challa continued N'Jadaka's vision of Wakanda helping people of African and African-American descent across the world, via the use of outreach centers in peace, instead of rebelling against their oppression.

In N'Jadaka's final moments, after being mortally wounded by T'Challa, he reflected on his decisions that brought him to Wakanda and realized that he was still only a young boy chasing the fairy tales his father had told him. He was also brave in death and even complimented his cousin's final blow against him, but refused to be healed, wanting to die free like some of his oppressed ancestors did. Ultimately, as hate-filled as N'Jadaka was, he still found beauty in the Wakandan sunset that his father told him about so many times before and died peacefully. 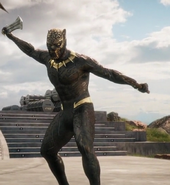 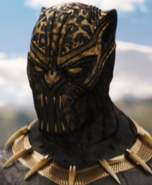