"You're a disappointment, sister. Of all our siblings, I hated you least."
―Nebula[src]

Nebula was an assassin and "adopted" daughter of Thanos. After reconciling with her "adopted" sister Gamora, she joined the Guardians of the Galaxy.

Raised in the service of the interplanetary warlord Thanos as his adopted daughter, Nebula trained to be a Galaxy-Class Killer. Nebula would often train along Thanos' other adopted daughter Gamora. One training scenario on the arboreal world of Dervani saw Nebula and Gamora pitched against each other in a competition to retrieve a data ingot for Ronan. The girls sparred on the surface, leading to Gamora throwing Nebula of a cliff, severely injuring her and requiring multiple cybernetic replacements. Upon reaching adulthood, Nebula was sent on a mission to locate The Orb for Thanos, on the planet Praxius IX, inside of one of the Cloud Tombs of Praxis, Nebula fell into a trap. Ensnared by an impenetrable Laser Thorn Energy Net, Nebula found herself at the mercy of the inhabitants and needed to be rescued by Gamora. Never one to tolerate failure, Thanos ordered Gamora to leave Nebula behind, with only a sharp blade to free herself. Nebula was forced to amputate her own arm in order to escape the netting.

A blue-skinned deadly assassin, Nebula is a loyal assassin in Thanos’ employ. Her advanced skill set and cybernetic enhancements make her a valuable asset but her resentment of Thanos’ other adoptive daughter Gamora may prove to be her Achilles heel. Thanos lends her services to Ronan the Accuser to help him retrieve The Orb. When Korath returned to Ronan's ship, the Dark Aster, to report that the Orb is in the possession of a thief named Star-Lord and that he planned on selling the Orb on Xandar, Ronan volunteered Nebula to retrieve it. However, Gamora strongly insisted that she recover the Orb, stating that she knows Xandar better than Nebula. Though Nebula protested, Ronan agreed to send Gamora in her place.

Nebula and Ronan are then summoned to Sanctuary, where Ronan lays out his grievances to Thanos, ending with killing the Other. Thanos then threaten to "bathe the stars in Ronan's blood" if he failed to recover the Orb, at which Nebula stated that it would be a pleasure to carry out.

Ronan and Nebula arrive at the Kyln, only to learn that Gamora and some others had already escaped with the Orb. As a Nova Corps fleet was arriving to defend the prison, Ronan ordered the prison massacred to hide their objectives. Ronan was eventually contacted by Drax the Destroyer that the Orb was on Knowhere. Nebula then pursued Gamora in an aerial battle. Before destroying her sister's craft, she remarked that of all her siblings, she hated her the least. Though the blast didn't incinerate Gamora, it left her and the Orb floating in space, the latter of which Nebula retrieved.

Returning to the Dark Aster, where they got in contact with Thanos, Ronan discovered that the Orb contained an Infinity Stone and decided to betray the Mad Titan, planning on destroying Xandar himself and then kill Thanos. Nebula chose to side with him, stating that if he succeeds in killing her father, she will help him burn a thousand worlds.

As the Dark Aster descended on Xandar, Nebula informed Ronan that a fleet of Ravagers were en route to intercept them. Nebula then ordered all fighters squadrons to deploy and attack. But even as the Nova Corps joined the battle, Ronan dismissed them as threat, stating that none of it would matter once he's won. Nebula then went to confront Star-Lord, Gamora, Drax and Groot. As she laid her disappointment in Gamora, she is interrupted by Drax, who blasts her with a cannon. Recovering, Nebula engaged Gamora in melee combat, but is ultimately overpowered by her sister and left hanging at the edge of a hull breach. Gamora offered to save her, stating that Ronan is insane. Labeling Gamora likewise, Nebula severs her left wrist and falls onto a passing Ravager ship which she commandeers and flees the planet.

Three weeks after the Decimation, Nebula was trapped aboard the powerless Benatar with Tony Stark where they played games to pass the time and developed a friendship. With Nebula's help, Tony recovered from an infection in the wound he got from Thanos and the two were rescued by Carol Danvers shortly before they ran out of air. Returning to Earth, an overwhelmed Nebula grieved alongside Rocket Raccoon for all of those they lost. Nebula helped the Avengers find Thanos who had destroyed the Infinity Stones to prevent their usage again. Nebula recognized that Thanos was not lying. With his last words, Thanos admitted he may have been too hard on Nebula before Thor decapitated him.

Over the next five years, Nebula continued working to protect the galaxy with Rocket, remaining in contact with Natasha Romanoff on Earth. After Scott Lang returned to suggest using the Quantum Realm to time travel, Nebula returned to Earth with Rocket to help. Nebula joined the mission to 2014 where she worked with James Rhodes to steal the Power Stone before Peter Quill. Nebula was able to retrieve the Orb, but damaged her cybernetic hand in the process, leading to a brief moment of camaraderie with Rhodes over their cybernetic natures that were forced upon them both by circumstance. As Rhodes returned to the present, Nebula collapsed due to a problem with her cybernetic implants.

At the same time as 2023 Nebula and Rhodes search for the Power Stone, Thanos prepared to send the 2014 Nebula and 2014 Gamora to Ronan's ship. However, the 2023 Nebula's implants linked with those of her 2014 self, allowing Thanos to see through her eyes and access Nebula's memories regarding the Infinity Stones. Realizing what had happened, 2023 Nebula tried to warn Clint Barton and Natasha Romanoff who were seeking the Soul Stone. Nebula was captured by Thanos. Nebula tried to convince her past self and Gamora to turn against Thanos, trying to tell Gamora how Thanos sacrificed her future self for the Soul Stone, but failed.

On Thanos' order, 2014 Nebula disguised herself as 2023 Nebula and returned to the present in her place. As Bruce Banner used a new Gauntlet to reverse the Decimation, Nebula used the Quantum Tunnel to bring Thanos' ship to the present where he destroyed the New Avengers Facility. As the battle raged between Thanos and the Avengers, Gamora approached the 2023 Nebula to ask her about their relationship in her time. After Nebula admitted that she tried to kill Gamora several times, they eventually became sisters, Gamora released Nebula to help stop Thanos.

As Clint tried to escape the destroyed facility with the Gauntlet, he was found by the 2014 Nebula, mistaking her for the Nebula he knew. Before 2014 Nebula could harm Clint, Gamora and the 2023 Nebula intervene. Though Gamora and 2023 Nebula tried to convince the younger Nebula to turn against Thanos, she refused, stating that Thanos would never let her. When 2014 Nebula aimed to shoot Gamora, 2023 Nebula shot her younger self through the chest, killing her. Nebula and Gamora saved Peter Quill from death, with Nebula explaining to a baffled Gamora that her choices for a romantic partner had been Quill or a tree.

After Thanos' final defeat, Nebula, now wearing the left arm of an Iron Man suit as her replacement arm, attended Tony's funeral and remained with the restored Guardians of the Galaxy, now joined by Thor Odinson.

Nebula is an adopted daughter of Thanos, who augmented her and converted her into a cyborg. Despite her familial ties to Thanos, she allies herself with Ronan the Accuser when she aquires an Infinity Stone for him to destroy Xandar and later wanted to use it's power against Thanos.

After reconciling with Gamora, Nebula is shown to have developed a more caring personality though Tony Stark calls her a little bit sadistic. While trapped with Tony onboard the Benatar, Nebula took care of the wounded man who recovered from his infection under her care and she was even seen giving up the last of their food to Tony. The two appeared to become friends during this time, even playing games together. After finding him asleep on the floor, Nebula cared enough to strap him gently into a seat. The loss of nearly everyone she cared about hit Nebula hard to the point that she took Rocket Raccoon's hand in mutual comfort upon returning to Earth and spent the next five years working with Rocket to protect what was left of the universe rather than going her own way. During the confrontation between the 2023 Nebula and the 2014 Nebula, the difference in their personality could easily be seen as well as Nebula's character growth. After the death of Tony, she is shown to have adopted the arm of one of his armors into her new left arm. 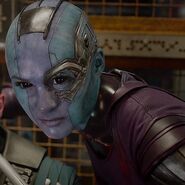 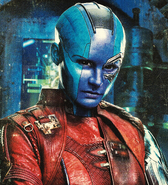 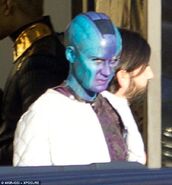