Avengers: Age of Ultron
Ant-Man
Captain America: Civil War
Spider-Man: Homecoming
Avengers: Infinity War
Captain Marvel
Avengers: Endgame
The New Avengers Facility was the base of operations for the New Avengers. The base was created after the defeat of Ultron and is used for science research, military training, weapon development and training of the new incarnation of the Avengers and their recruits. The base is run by Nick Fury, Helen Cho, Maria Hill and Erik Selvig. It houses multiple Avengers Quinjets and vehicles. It was destroyed in 2023 with the ruins becoming the site of the final battle with the 2014 Thanos and his army.

After defeating Ultron in Sokovia, Tony Stark re-designed the state of the art facility in Upstate New York to act as the New Avengers Facility. Most of the staff members are former S.H.I.E.L.D. agents. In addition, the facility has support from scientists; such as Erik Selvig and Helen Cho. With Tony and Clint Barton both gone, Thor traveling to Asgard to investigate the appearance of the Infinity Stones and Hulk is missing, Steve Rogers and Natasha Romanoff were left with the task of training a new group of the Avengers and recruits.

In order to prevent Hank Pym's technology at Pym Technologies from being used ill adversary by his protégée, Darren Cross, Hank enlisted the services of Scott Lang to become the new Ant-Man and commit a daring burglary at his company. But in order to pull of the mission successfully, they require a piece of S.H.I.E.L.D. tech being housed in an old abandoned Stark Industries warehouse in upstate New York. Scott along with a battalion of ant's are dropped lifted out a plane and fly towards the location, however, upon arrival, Scott discovers that this is the newly constructed Avengers headquarters and he is spotted by Falcon who engages him in battle. Scott manages to hold his own against him, while also getting the item he required.

Peter Parker is brought by Happy Hogan to the facility to see Tony, who offers him an opportunity to join the Avengers with a newly designed suit and official membership status, however, Peter turns down the offer surprising Tony Stark.

Following the Decimation, the surviving Avengers retreated to the facility to recuperate from their losses. They were later joined by Carol Danvers, Tony Stark and Nebula after Danvers rescued the Benatar from space and landed it on the facility's lawn.

Over the next five years, after discovering that the Infinity Stones had been destroyed, the facility acted as the headquarters for the surviving Avengers and their allies as they try to help what's left of the universe. Natasha Romanoff remained at the facility full-time, coordinating through holographic transmissions with Danvers, James Rhodes, Okoye and Rocket.

After being released from the Quantum Realm, Scott Lang arrived at the facility while Steve Rogers was visiting and suggested using the Quantum Realm to travel into the past to retrieve the Infinity Stones to reverse the Decimation. The surviving Avengers, minus Tony Stark, used the New Avengers Facility as their base as they researched time travel using the Quantum Realm. After Tony decided to help, they succeeded in building a time machine through which they departed for 2012, 2013 and 2014 to retrieve the Stones. After the Avengers return, minus the deceased Romanoff, Tony built a Gauntlet which Bruce Banner used to reverse the Decimation. 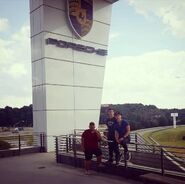