"I've watched you from deep behind Norman's cowardly eyes, struggling to have everything you want, while the world tries to make you choose. Gods don't have to choose. We take."
―Green Goblin[src]

Norman Osborn was the founder of Oscorp and the supervillain known the Green Goblin. Osborn was transported from his universe to Earth-199999 when Peter Parker tampered with Doctor Strange's spell to make the world forget that he is Spider-Man.

Norman Osborn shared the history of his counterpart; until he was transported from his universe into Earth-199999.

Due to a spell cast by Stephen Strange, Norman was pulled into Peter Parker's universe from a time before he died. Norman managed to regain control from his alternate personality and befriended May Parker who encouraged Peter to cure all of the villains that were pulled to his world. Norman and Peter worked together on creating a cure, saving Otto Octavius before the Green Goblin reasserted control over Norman's body. The Goblin convinced the uncured villains to turn against Peter and engaged in a battle with him that demolished Happy Hogan's condo. Aunt May managed to inject the Goblin with the cure that Norman had developed for himself, but it failed to work on him. Desiring to free Peter of his "weakness," the Goblin mortally wounded May and escaped.

Peter was subsequently joined by two other versions of Spider-Man, including Norman's own Peter, and the three versions of Spider-Man came together to create cures for the villains brought to the other universe. Norman's Peter was able to create an anti-serum to the Goblin Formula to save him, telling the alternate Peter that he'd been thinking about how to do it for a long time.

After the Spider-Men cure the other villains, the Goblin attacked and destroyed Strange's spell. The vengeful Peter-One engaged the Goblin in battle, defeating and nearly killing him with his own Glider before Norman's Peter stopped him. The Goblin non-fatally stabbed Peter-Two in the back and taunted Peter-One about being the one who killed May, but Peter-One injected him with the cure that Peter-Three threw him, destroying Norman's Green Goblin personality and returning him to normal. Norman was left horrified by his own actions before being returned to his own universe when Strange cast the spell to make everyone in the alternate world forget about the existence of their Peter Parker. 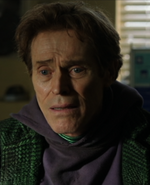 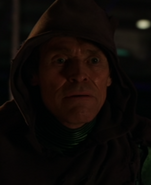