This article is about the character. For the 2007 film, see Fantastic Four: Rise of the Silver Surfer.

"All that you know, is at an end."
―Silver Surfer[src]

Norrin Radd, also known as the Silver Surfer, is a powerful being who helped the Fantastic Four defeat Galactus.

Silver Surfer agreed to become Galactus' herald in return for the safety of his home-world, and the woman he loved. His power comes from the surfboard itself, which also serves as a beacon for Galactus. After Doctor Doom renders him unconscious, he steals the board. The Fantastic Four free the Silver Surfer from imprisonment to help them defeat Doom.

Doom throws a cosmic spear at the Silver Surfer to kill him, but Sue Storm steps in an attempt to save him. She tries to use her force fields to block the spear, but it passes through the field and impales Sue. The Silver Surfer turns on Galactus after he witnesses Sue dying in Reed's arms. The Silver Surfer brings Sue back to life and then goes off to destroy Galactus, appearing to implode when he does. At the end of the film, the Silver Surfer is floating aimlessly through space, with his board in the background. As he drifts off screen, his eyes open and his board flies towards him. 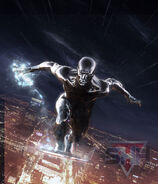 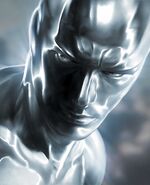 Retrieved from "https://marvel-movies.fandom.com/wiki/Norrin_Radd?oldid=264039"
Community content is available under CC-BY-SA unless otherwise noted.