"You really think that just because you have an idea that it belongs to you?"
―Obadiah Stane[src]

Obadiah Stane was the business partner and eventual enemy of Tony Stark. When Tony decides to stop producing weapons at Stark Industries, Obadiah retaliates by building his own iron suit.

After Anton Vanko was arrested and deported back to Russia, Stane talked to Howard and suggested that he perhaps must take Anton treason as a some sort of sign.

When Tony was captured by the Ten Rings, Nick Fury was fearing Stark would sell his own country to save his life, so he ordered Phil Coulson to talk to Stane. Stane tells Coulson that Tony has always been a man who makes his own rules, like his father; he also told him that everyone thought Howard was crazy for leaving the company to a minor, but Stark surprised them all, Coulson tells him that they're talking about terrorists, but Stane points out that he wants to find out if Tony can tell them about their defenses, the answer is not much as he likes the challenge of inventing things but from what he's done with them, he simply leaves it to others that he trusts like himself or Rhodey. he offers Coulson a drink, which he declines, Stane claims that if they wanted the Security codes to the playboy mansion then Tony would deliver it, Stane then leaves as he prepares the company for the fact that Tony may not return.

" How ironic, Tony! Trying to rid the world of weapons, you gave it its best one ever! And now, I'm going to kill you with it!"
―Obadiah Stane[src]

Stane was a businessman who headed Stark Industries after the death of Stark's father and became the firm's second-in-command when the younger Stark came of age. Stane had cooperated with the Ten Rings terrorists in Afghanistan to kill Stark and take over Stark Industries, due to his ambition and jealousy of Tony's position.

The Ten Rings soon found out who the target was and felt they hadn't been paid enough to kill Stark. They kept him alive to use for their own advantage by having him build them the Jericho missile. Following Stark's return from Afghanistan, he appears to assist Stark's attempt to refocus the company away from arms manufacturing. While Tony is working on his suit Stane starts to take over Stark Industries covertly by sending weapons to both sides of the war.

After Ten Rings finds the remnants of the prototype armor, Stane makes a new deal with them to deliver the prototype to him, but ultimately betrays the group and has them killed, stealing the Mark I armor. While working on building his own, bigger, more powerful suit, he discovered that Tony's assistant Pepper Potts found out about his plans so he steals Stark's arc reactor from his chest to power his new suit and leaves Stark for dead.

Pepper and a few S.H.I.E.L.D. agents go to arrest him but they are no match for his new suit. Stane was about to kill Pepper, when Stark, alive and in the Iron Man suit, comes to save her. The two of them engage in a brutal fight over the Stark Industries building. In the final moments of the battle, with Stark's power supply running low, he has Pepper overload the prototype large-scale arc reactor found at the complex. Stane was knocked unconscious by the blast, and he with his suit tumble into the generator, causing an explosion that kills him and destroys the armor. S.H.I.E.L.D. agent Phil Coulson who is working with Stark, later covers up Stane's death by explaining he disappeared in a private plane while on vacation.

Obadiah was treacherous, intelligent, callous, sociopathic and extremely manipulative. He was capable of feigning interest in Tony's welfare, and his father before him, when he was manipulating the actions of Stark Industries for his own selfish and narcissistic interests. He was introduced as a fatherly, charismatic and highly practical man whom Tony trusted very deeply, but his true colors increasingly revealed as a truly sociopathic and diabolical man. He had no complaints about ordering Tony Stark's assassination, even though he'd known the man for years, showing that a conscience was completely lost on Obadiah.

Obadiah was a very calm man, even when causing others pain or leading up to a brutal or violent event, and would almost always keep his cool in certain scenarios. That being said, he was slightly delusional, believing that his megalomaniacal actions had been for the good of the company even though it would eventually run it into the ground, he was also extremely arrogant to the point where he treated most individuals who worked with or under him poorly. 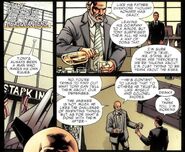 Obadiah adorns the cover of Newsweek

Stane realizes Pepper Potts has learned of his treachery

Stane admires his own suit.

Stane piloting his own armor.

Obie taunting Tony shortly before his own demise.