"I have sacrificed much to achieve peace. So too must a new generation sacrifice to maintain that peace. Responsibility! Duty! Honor! These are not mere virtues to which we must aspire! They are essential to every soldier, to every king!"
―Odin[src]

Odin Borson was the father of Thor Odinson and the late Hela Odinsdottir, the adopted father of the late Loki Laufeyson, the Asgardian God of War and Wisdom, and the king of Asgard. A powerful yet peaceful leader, Odin was the Allfather of all Asgard and was dedicated to preserving peace between the Nine Realms of Yggdrasil before his disappearance, his status was unknown as Loki appeared masquerading him during a brief conversation with Thor.

In Thor: Ragnarok, it was revealed that Loki had placed Odin under the influence of his mind control (causing him to believe that he was a normal human) and send him to Earth. Odin eventually broke free from Loki's mind control, but chose not to return to Asgard, as he knew that his life was coming to an end. Instead, he chose to spend his last remaining days on earth, in Norway. He then dies peacefully with both his sons at his side. He later reappeared in a vision to Thor to help his son realize his true power and what he had to do to defeat Hela.

After Odin's death; his son, Thor succeeded him as the king of Asgard.

Odin is a member of the Asgardian race, once looked upon by people of Northern Europe as Gods, and is the ruler of Asgard. At one time he led a force of Asgardians against the jotuns in defense of people on Earth. The Asgardians beat the jotuns back to their home realm of Jotunheim where Odin granted them mercy and offered them a truce. In the process, he also confiscated the Casket of Ancient Winters that gave them much of their power and rescued a baby jotun who had been abandoned in the conflict. The infant Loki grew up as a brother to Odin's real son Thor, and Odin kept the boy's heritage a secret in the hope that he would one day come to end the enmity between the two races.

Odin was mentioned by Johann Schmidt as keeping the Cosmic Cube in his trophy room, and for some reason leaving the cube on Earth eons ago.

Centuries after the Asgardian/Jotunheim war, Odin held a ceremony to name Thor as his heir but the event was interrupted by several jotuns breaking into Odin's vault. He activated The Destroyer in defense of the vault, thus ending the threat of the jotuns reclaiming their artifact but opted not to press the matter any further. Thor insisted that he launch an attack on Jotunheim but Odin rejected the idea, preferring instead to preserve the shaky truce. Thor then defied his father's will and launched a small-scale attack of his own. Upon learning of Thor's defiance, Odin went to Jotunheim himself and drew his sons and their friends back to Asgard. Thor had foolishly reignited the war with the jotuns and, for his transgression, Odin banished him to Earth.

Loki had discovered the truth of his long-concealed ancestry during the fight on Jotunheim and confronted Odin with the discovery. Odin could only relate a historical account of how he had found and rescued Loki before lapsing into his restorative "Odinsleep." With Odin incapacitated and Thor exiled, Loki seized the throne of Asgard for himself. He manipulated the others around him as Odin slept, even going so far as to arrange Odin's assassination at the hands of the jotuns, but when Laufey, King of the Frost Giants was about to kill Odin, Loki revealed his true plan of double-crossing and killed Laufey to make his father proud of him.

Odin finally awoke after Thor had secured a return to Asgard with an act of self-sacrifice and had defeated Loki. He raced to witness Thor grabbing hold of Loki's spear as Loki fell into an endless void and in turn grabbed Thor to prevent both of his sons from falling. Loki, dangling from the spear, looked up and appealed to Odin that he did what he did to make Odin proud of him, as he felt unloved. Odin quietly rejected this with a sad smile, and then watched with sadness when Loki released the spear and fell in to a vortex of time and space.

Some time later, Odin was approached by a sullen Thor. They both had suffered losses, and Thor had come to make an admission that he'd been wrong and hoped that one day he'd make his father proud. Odin, understanding the personal sacrifices that Thor had made for the good of three races, told Thor that he had made him proud.

When Heimdall noted that the destruction of the Bifrost "continues to shift the balance of power across the nine realms...and into the worlds beyond Yggdrasil." Thor realized that by saving Jotunheim, he had weakened the other realms. Odin indicated this has brought the universe closer to Ragnarok. A guard told Odin that Tyr had requested to speak with him.

One year later, Frigga discovered that Loki had survived and told Thor and Odin, but Odin didn't think it was possible, noting that since he fell in Yggdrasil his body should have been scattered around the universe, but Frigga was sure that Loki was alive and planning to do something with the Tesseract. Heimdall confirmed Frigga's concerns but Thor didn't think he'd be able to return to Earth without the Bifrost. Odin told Thor that there was another way to go back to Midgard. Using dark energy, Odin told Thor to bring Loki and the Tesseract home and that with the Tesseract they could rebuild the Bifrost.

After discovering that Loki was on Earth after the Cosmic Cube, with the Bifrost destroyed, Odin had to summon dark energy to send Thor to Earth, so he could stop Loki.

After Loki and Thor returned to Asgard, Loki told Odin why he had to attack Earth, but Odin no longer considered Loki his son and called him a "creature I do not recognize". Odin informed Loki that the only reason he wouldn't be executed was because Frigga still loved him. Odin then sent Loki to the dungeon.

"Some believe that before the universe, there was nothing, they're wrong, there was darkness and it has survived!"
―Odin[src]

Loki was brought before Odin, who confronted him for his crimes. Odin did not execute Loki because Frigga did not want him dead, so he sentenced him to life imprisonment.

When Jane Foster was taken to Asgard, Odin initially tried to have her taken back to Earth, believing her to be suffering from human illness, until he realized the Aether was inside her. He told Thor about the Aether and the Dark Elves, and that he did not know how to get the Aether out of Jane.

When Malekith and Algrim attacked Asgard, and Algrim killed Frigga, Odin decided to wait for Malekith to attack again so that he could fight back and kill him. Thor opposed this plan, since many Asgardian lives could be lost and Malekith could potentially win, and suggested the alternative of taking Jane to Svartalfheim to draw Malekith away from Asgard, but Odin refused, apparently blinded by hatred and grief from Frigga's death, as well as thinking Thor's plan to draw Malekith away from Asgard by taking Jane to Svartalfheim was too risky. When Thor asked how Odin was different than Malekith, Odin said the difference is that he will win.

Thor then released Loki and the pair took Jane to Svartalfheim with help from Volstagg, Sif, and Heimdall. Odin sent his soldiers to stop Thor by any means necessary, but the soldiers were unsuccessful.

After faking his death, Loki appeared before Odin disguised as a warrior. He told Odin that Loki's body had been found. Afterward, Loki usurped the throne from Odin and now rules Asgard, disguised as Odin, leaving his current whereabouts unknown.

"Asgard is not a place, it's a people. And its people need your help."
―Odin[src]

Odin was the all-powerful ruler of Asgard. As such, he was wise, honorable, and dedicated to keeping the peace between the Nine Realms. He believes in responsibility (in terms of being careful and responsible for your actions) duty (in terms of the protection and keeping of peace between the Nine Realms) and honor (always being a man of your word). However, when angered or upset, he can be very stern or borderline ruthless, such as when he stripped Thor of his powers and exiled him to Earth. However, Odin had only done this because it was necessary for Thor to learn how to be a good ruler. As Frigga stated, "everything he did, he did with an purpose". After Thor reclaimed his powers and returned to Asgard, Odin expressed pride in his son and his belief that he will be a wise king. 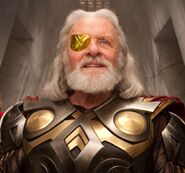 Odin is about to banish Thor to Earth. 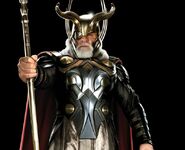 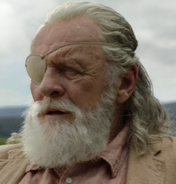 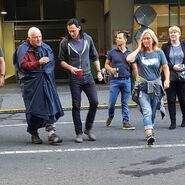 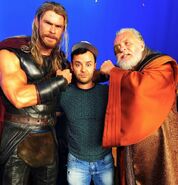 Retrieved from "https://marvel-movies.fandom.com/wiki/Odin_Borson?oldid=276924"
Community content is available under CC-BY-SA unless otherwise noted.